A Twilight Party Alice Would Be Proud Of

June 11, 2010
After a week of looking at some wonderful sites and gathering some great Twilight party ideas, I'm ready to share with you my Twilight party.  Hopefully, Alice will be proud of me.
Planning:
First I had to decide if I wanted a full dinner party before the premiere of the movie, or just a light "cocktail" type party.  I decided to go with the full party since there was so much more you could do and decorate for.  Plus, you need to have some Good Food in your stomach so you won't drool too much over all the shirt-less hotties in the movie.
Decorating:
In true Alice style, I decided to use LOTS of twinkle lights up the driveway and into the house.  I think it will be great to intertwine the lights up the driveway and in the trees.  I have a short driveway, so I'll carry the lights into the rose bushes in the front of my house and along the walkway.  Since we are going to be going to the 10:30ish movie, it should work great for a late dinner party.
At the front doorway, I love the idea of putting a "The City of Forks Welcomes You" sign at the front doorway from Design Dazzle.   My friend also had posted on her blog a fun idea about putting a bunch of plastic forks in your front lawn to help guests enter into "Forks, Washington."  Thought that was a fun idea! 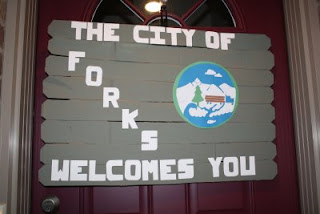 This sign from Twilight Novel Novice would also be really fun to put inside the doorway with a basket of bandainds as guests come in.  It would also be fun to put some sparkly body glitter or lotion in the basket so guests can "adorn" themselves like a true vampire.

Once entering, it's all about the color scheme and lighting.  With Twilight, the books are all in the cover colors are red and black.  So these colors would be promonate in everything.  I will purchase alot of candles in red and white. I love the Hostess with the Mostess' idea of putting quotes from the book around some of the larger candles and in black frames on the tables and surfaces around the party.  You can find some great printable quotes from her site here.  She also recommends putting red apples in large vases around the room too.  I just love the table ideas to create an air of fantasy, romance, and Twilight theme. 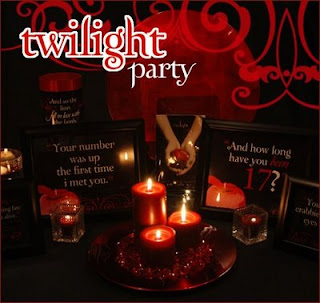 Almost did, but can't forget to have music at the party.  My daughter has the Twilight soundtrack, so we'll probably mix that in with the Eclipse music playlist from Stephanie Meyer's site in the background.  I may even splurge and go get the other 2 soundtracks.
Dinner Table Decorations:
I love Twilight Novel Novice's centerpiece with a true tribute to all 4 of the Twilight books.  She took a vase and filled it with red and clear glass beads.  Then she added wax tulips painted to match the cover of the New Moon book and stemmed red apples from the Twilight cover.  Around the vase was tied a big red ribbon from Eclipse.  And the whole set is sitting on a chess board with red and white chess pieces from Breaking Dawn.  (She does say it's easier and cheaper to just buy a chess set and paint the extra pieces red.) 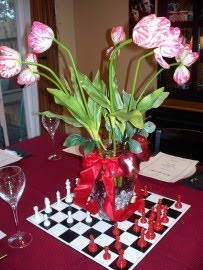 My tablecloths will be black with red napkins and white dishes.  (No need to go out and buy new dishes, I'm trying  not go completely overboard.)  I want it to keep an elegant theme, so I'm lucky in that I have the glass white plates from Walmart that will work perfectly.  For place settings, I'll use Design Dazzle's idea of the red apple on the crystal candlestick holder with a red ribbon around the base.  Each apple will have a green "leaf" with the guest's name tied to the top. 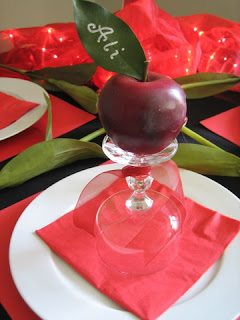 I also really like Bart and Ashli's blog post idea of placing different tags of each of the characters around the glasses so guests will remember which cup is their's as the walk around with their drinks. 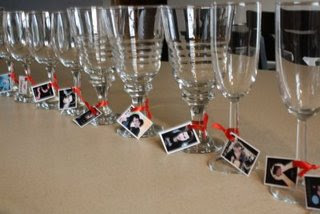 Dinner Menu:
In the restraunt scene in the Twilight book and in the movie when Bella goes to first meet the Cullen family. Bella is served Italian food, so I think we all agree Italian is the only appropriate thing to serve!
Since we have so many guests coming, I think I'll make a variety of small Italian dishes in a buffet style so everyone can have a little or they can each have something different.  I think I'll try a new dish of Bella's Mushroom Portabella, my family's standby of Chicken Alfrado, and my husband's amazing Lasagna. (He spent 2 years in Italy and can out-cook anyone's lasagna...but I may be biased!)
For some ideas of more things to make, you can check out ... blog for some great Italian recipies for your own Twilight party.
For drink's I would love to steal Avah's idea of serving Shirly Temples.  The little cherry in the bottom of the drink can almost look like an apple.  I may even go get some bottles of Cherry 7-up and add Hostess with the Mostess' blood labels to the outside of them. 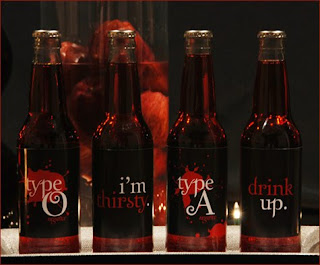 Games:
Although we will be going to see Eclipse as the main entertainment of the evening, I am a Recreation Major so can't throw a party without at least a few games.  I'm not a huge fan of pre-openers, I never liked having to play them myself, but they do serve a great purpose....to break the ice and get guests mingling.
I like the idea I saw on several sites where each guest was given a name to put on their backs as they entered the house.  Each name was given according to how much the guest knew about the series Twilight.  Novice's might be given names such as "Bella" or "Jacob".  More advanced readers may have names such as "Charlie Swan" or "Carlisle".  Very advanced Twi-hards may have names such as "James" or "Renesmee".  Each guest needs to figure out their character by asking only Yes or No questions.
Between the meal and desert, guests can play Twilight Scene It (my daughter got it for Christmas last year) or a Twilight based trivia game. Guests can be asked to name the speaker of Twilight quotes or questions about scenes from the books or movie.  I even found a great idea for a Twilight scavenger hunt and treasure hunt.
The winner of the game will win a Golden Onion like Bella recieved in Twilight.  Just spray paint a large onion with gold paint!  How fun. 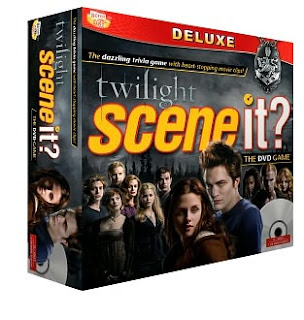 Dessert
I LOVE Louise Hayden's Twilight cakes from here.  They are all so beautiful and would make a great addition to any Twilight party.  I think the Twilight Chess board cake is my favorite. The cake recreates the chessboard from the cover of the fourth book, Breaking Dawn.  I think we'll add some edible chess pieces in chocolate to complete the set!
Then, since I absolutely love cupcakes, I will make a few Werewolf Cupcakes from Annies Eats and these Vampire Cupcakes from Baking Bites. 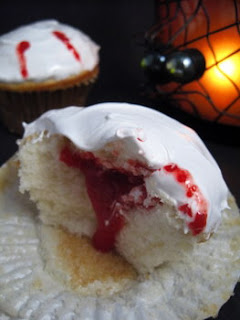 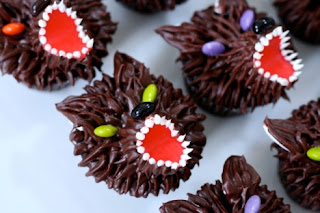 I would hate to mess up these beautiful cupcakes, but I do love Confessions of  a TwiCrack Addict's idea of adding forks in the center of the cupcakes with Twilight sayings. 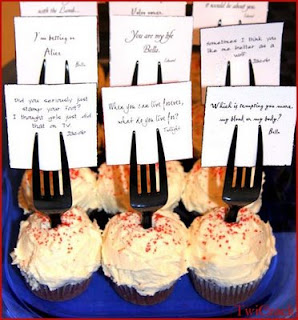 Party Favors:
Of course I'm going to use my Team Edward and Team Jacob candy bar favors.  I just love them and I think they are the perfect size to sneak into your purse for a sweet treat during the movie.  So I have to add them to the treat bags. 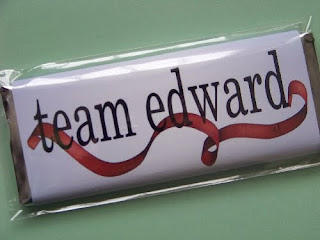 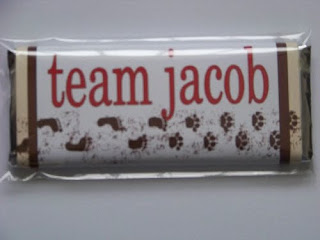 I think I will also make a few extra of the chocolate chess pieces from the cake and wrap them up as sweet treats for guests to take home.  Also, the next time Bath and Body Works puts on a sale, I think I'll grab some of their bottles of "Twilight Woods" body lotion to add.  Finally, I think I'll wrap up some of the candles with sayings in Tulle from off the tables and give each guest one as they leave.
Hopefully, this will be a Alice worthy party and one you can get some great ideas from!  Now go and have a sweet day!
decorations favors party twilight