June 18, 2010
So this week's party is one that's close to home.  I'm actually going to have most of my family in town (all 21 of us) for the 4th of July.  So we're going to get together with them and a few of my closest friends (for a total of 75 people) for a holiday BBQ, fireworks party, and Birthday for my soon-to-be 6 year old son "Z".  So I've spent ALOT of time thinking about how to make this a great party, and hopefully I've succeeded.  If you see a problem, or better way of doing something, PLEASE let me know! 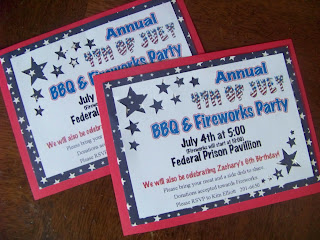 I made some really cute invites for this party.  I printed out the party inforatmion on plain white cardstock, which I then ran through my Craft Robo to cut multi-sized stars on the top left and bottom right.  I glued the cardstock to some cute blue and white starred patriotic pattern paper that I found at Jo-anns.  This shows the blue pattern paper on the sides and through the cut-outs in the paper.  Doesn't it create a fun look?  Then I brought in the color red by gluing the whole invite to a slightly larger piece of red cardstock.  I may be a bit biased, but I think they turned out really cute. This party will be held outside at a pavillion and softball field at my hubby's workplace.  So we're praying for good weather so I can decorate to my heart's content.  This pavillion has wooden support posts around the outside edges.  I plan to create red, white, and blue pennants from cardstock to hang in a double-tiered around the pavillion using the posts as a swag point.

For the head table with the food, I'm going to use a red plastic tablecloth with a blue and white fabric runner down the center.  I'm giong to get 5 yards of blue patriotic fabric and cut it down the center lengthwise.  Since it's so windy here some days, I'm going to use double sided tape to tape the runner down and some picnic table clips for the main tablecloth.  The other half of the fabric will be used to make a matching cover and runner for the dessert table. 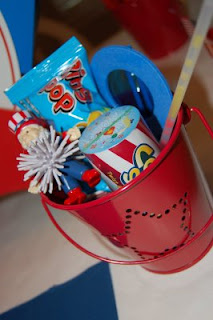 The picnic tables we'll eat at will have white butcher paper table cloths.  I'll put a centerpiece of a cute Red, White, or Blue bucket like Simply Creative Insanity has here or a large recycled can with patriotic paper with crayons on it.  This way the kids can color on it while they wait for their food or for their parents to eat.  I'm also trying to find some wooden stars that I can paint to add a little punch to the bucket centerpiece. 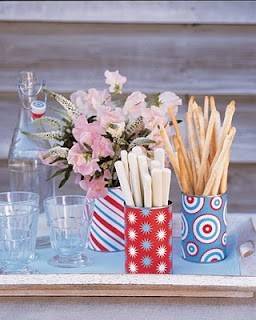 The silverware will be on the main food table inside matching centerpiece buckets or paper covered recycled cans.  I think I'll put some river rock gems in the bottoms so the wind son't blow the cans/buckets over.  The plates and napkins will be also patriotic colors and sit beside the white silverware.

The dessert table will be decked out in the same red tablecloth and fabric runner as the food table.  In the center of the table will be a large cupcake with 6 candles for "Z"s birthday portion of the party.  To each side of the cupcake will be over 100 cupcakes on a large cupcake holder that I found at Jo-anns.  They are a plain white, which will set off all the holiday colors and designs on the cupcakes themselve.  Then, we'll scatter other desserts around the table.

It will be a classic potluck style BBQ with meats, salads, and treats.  Since I have so much family to add to the mix, we're going to bring alot of food.  We'll bring our family favorite of "Pink Salad", corn on the cob for all the guests (someone find me a good sale!), Sam's Club's yummy potato salad, and hopefully we can figure out a way to bring my hubby's buttery, greasy, yummy, tasty cubed potatoes.  We'll see what the other guests bring to add to the yum! 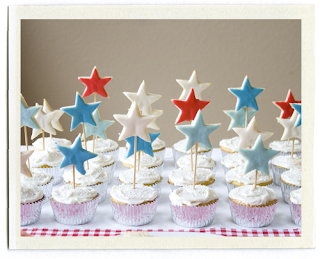 For dessert, we'll have 1 Large cupcake and over 100 small cupcakes.  The small cupcakes will have a variety of toppers on them.  We'll have everthing from Inchmark's cute sugar cookies stars, to pinwheels, to the patriotic cupcake toppers I shared yesterday.  My son is so excited to start baking already!

We'll also have bowls of Red, White, and Blue M&Ms in both plain and peanut, a cut up Watermelon,  oatmeal chocolate chip cookies (another family favorite), and an apple pie.  What's more American than that?  To top it off, I'm going to find a large bucket and fill it with ice and popcicles.

We should have enough food to overeat and stuff ourselves just as the founding fathers would have wanted!

To start the party off and give the kids something to do while the meat cooks and everyone arrives, I'm going to do a craft with them.  I wanted to do something that would allow my kids to have a souvenier for this fun day with their cousins and friends.  So originally I wanted to do t-shirts like this and this.  But I realized the cost and mess factore where way out of my control.  So instead, I refined an activity that I had wanted to do last year when my family got together--necklaces.

I bought a bunch of stretchy necklaces where I wanted to add a phone number on them so incase the kids got lost at any of the theme parks or activities we did, someone could call us.  Well, I never could quite make it work in time for last year's reunion, since no one makes affordable numbers on beads big enough to gon on the necklaces that I bought.  This year, I have a new laser printer.  So I have drilled holes in small wooden circles from Hobby Lobby.  I'll let the kids paint and decorate the front and I'll put a sticker on the back with contact information.  I'll go ahead and seal them with modge podge just in case.  Then the kids can decorate the necklaces with pony beads in different colors and shapes. 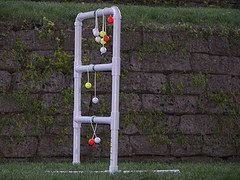 Hopefully, they'll be done about the time the food is too.  After dinner, I'll let the adults sit, talk, and settle their stomachs.  The kids can play with a variety of items I'll bring-- a football, basketball, volleyball, frisbee, ring toss, and lawn golf.

Once we have settled, I'm going to put everyone's name in 2 jars.  One for kids 10 and older and one for kids 9 and under.  Two team captains will draw a name from each of the jars.  This will set up the teams--hopefully evenly and fairly for a fun game of Kickball.  We had such a good time playing this for FHE a few weeks ago that I'm sure we'll all enjoy the game.

When the game is over, we'll meet back for cake and ice cream for "Z".  Since his actual birthday isn't until 3 weeks later, we'll give him one big present that all his cousins can play with while they are visiting.

My Sister-In-Law has a desire to see fireflies while she's here, so we'll take glass Ball jars and go firefly hunging for 1/2 hour while the men prepare for the "big show."  I LOVE Family Fun's idea of the firefly party and had to incorporate it into our evening. 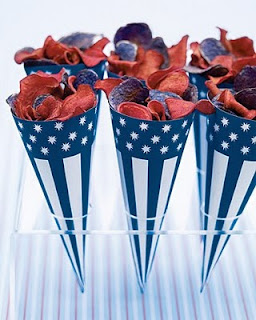 It should be getting dark by then and so we'll do sparklers for the kids and pop Jiffy Pop popcorn for families to enjoy during the show.  I'll make these patriotic treat holders from Martha Stewart for the popcorn so everyone can have their own "bowl".  Then, it's time for our own fireworks show!  We've done this for the past few years and have really enjoyed being able to have a private showing.  I can't wait to share the fun with family too! 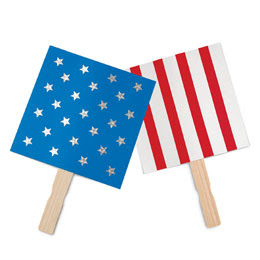 The kids will each have their own necklaces to take home and I'm going to make these Family Fun Festive Fans for the adults to use during the party if it gets hot.  They are so patriotic looking and handy to have! 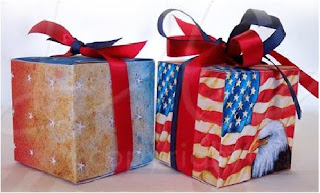 I'll also have some of these boxes done up as cupcake holders so we can send home any of the leftover cupcakes with friends.  We can't take them since we'll be busy parting all week.  And how can you have a night party without glow in the dark necklaces?  It's un-American!  So we'll definitly be making a trip to Oriental Trading for some extra light to add to our night!

So what do you think?  I think it should be a fun, festive, sparkly night!
decorations favors party patriotic