March 27, 2012
The Perfectionist had a Scout fundraiser last weekend to raise money so he and the rest of his troop could go to Scout camp this weekend.  They decided to have a pasta dinner and auction.  The moms were asked to make a dessert to donate.

I thought I would try something new and make my chocolate covered oreos into Easter Bunnies and Easter Chics.  I'm a little hesitant to say the bunnies were a success, but I LOVED how cute the chics turned out.  I think I got too 'creative' on the bunnies and should have stayed simple like I did on the chics.
Here's a basic tutorial if you want to make your own. 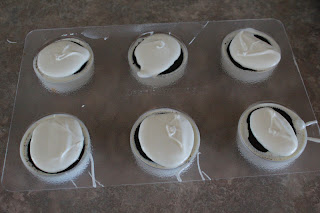 Using Oreo sandwich cookies, dip your cookies into melted chocolate wafers.  Or if you want a really smooth oreo, you can check out our new Chocolate Oreo molds.  They are a little expensive, but I think they are so worth it! 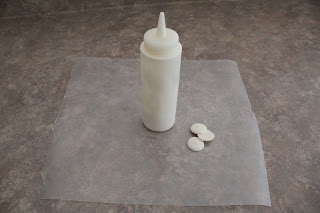 While you are waiting for your oreos to harden, melt some wafers in a plastic squeeze bottle and get out a piece of parchment paper. 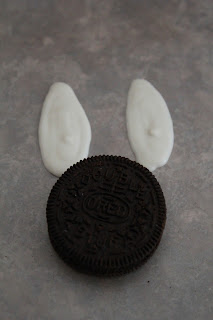 Using the melted white chocolate, I made ears to go on my bunnies. I used a chocolate oreo as a template so I knew how big to make the ears. 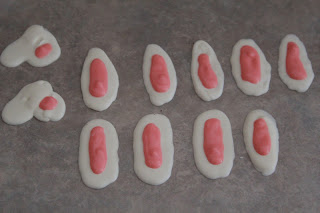 As soon as they ears were hard, I added a little pink chocolate to them. 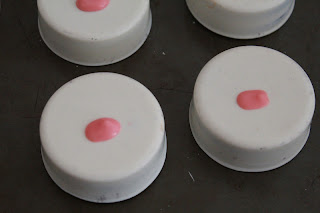 While the ears were hardening up, I made the faces on the bunny by using the pink chocolate to make an oval for the nose. 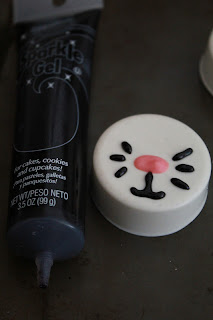 I used this sparkle get to make the rest of the face, but to be honest, I wish I had used black chocolate.  The gel never got hard and made the oreos hard to wrap with Saran wrap.  To finish the face, I used black and blue to make the eyes.  Again, I wish I had just used the blue and made dots like I did on the Easter Chic.  They looked so much cuter. 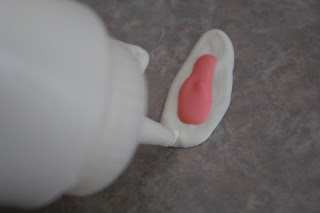 To finish off the bunny, I added a little bit of white chocolate to the bottom of the ears and placed the oreo on top of them so they looked like they were coming out the back of the head. 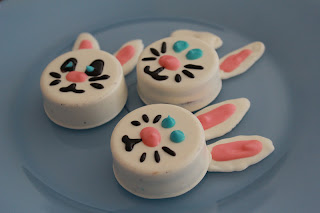 The chics are done basically the same way. 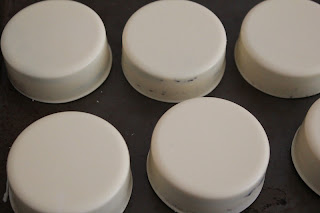 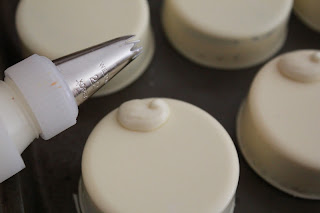 I poured the remaining melted yellow chocolate into a special plastic bottle that allowed me to put a decorating tip on it.  (You could use a decorating bag too.)  Using a #22 tip, I did a small swirl on the top of the oreo. 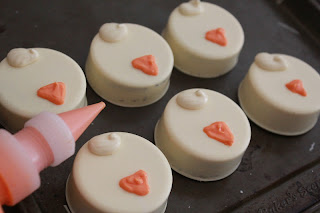 Using orange melted chocolate, I added a triangle to look like a beak. 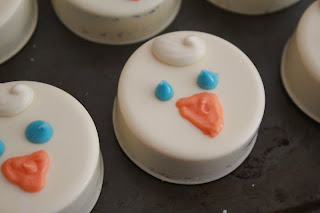 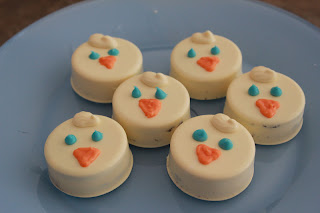 The oreos went for a super price, especially when I packaged them up on a pale blue cupcake holder that I made.  I can't wait to make a few more to add to Easter Baskets this year.  Yummy!
chocolate easter oreos