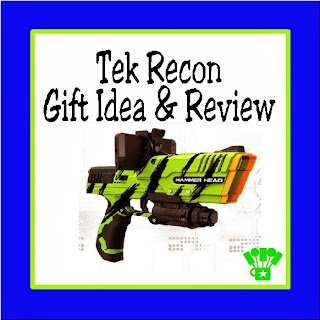 I have three boys in my home who are ALL BOY when it comes to toys and games.  Our house is filled with wrestling, crude jokes, lots of laughter, sports equipment, and play guns.  So when I got the chance to review the new Tek Recon

Advanced Battle system, we were all very excited!

We were fortunate enough to recieve three guns, which worked out perfect for my three boys.  No one was left out during play.  We recieved the

As soon as we opened up the package, the boys were anxious to get started.  Just like other "boys" in my house (ahem, no names there Dear Hubby), there was no waiting or asking for directions.  It was nice that the guns were so easy to load and figure out so they could get started immediately.  Our Blaster gun was a little rough to actually fire at first and would only shoot every fourth or fifth pull of the trigger.  I'm not sure if it was the gun or the long trigger.  The boys just kept firing though and didn't complain too much about it.
We did find out rather quickly that it was easier to keep the play in one area of the house, since the "bullets" went everywhere and had to be searched out as soon as the boys needed to reload.  I found these little rubber "0"s everywhere over the next week.  They were under the couch, down the stairs, even in my shower. (Still not sure how that one happened.)  I'm not sure how you'd play with these outside unless you had a never ending supply, or maybe painted them with glow in the dark paint.
It took the boys a little longer to download and play with the Tek Recon

app, but once they did, they were super excited and we found them hiding behind corners and couches all the time.  The gun play got a little wilder and the excitement kicked up a few notches.  They loved the heat sensor part of the app and ran around trying to find each other in the dark.  There is talk of going down to the local park and playing Capture the flag with a group in the wooded area, so I guess the app made the guns go above and beyond the other play guns we have in the house.