Carve out some quality time with your child by reading before bed. With these amazing series, you'll find adventure, bonding, and a love of reading. 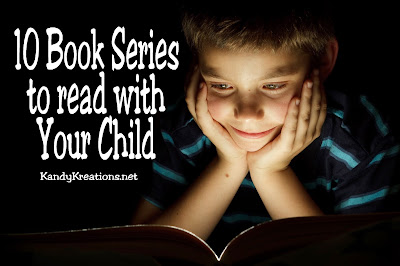 With four kids in the house (well, three now) it's a little hard to have one on one time with each of them some days.  We always try and have family dinner together to talk about their day, but sometimes it's nice to just have a quiet moment or two with each of my kids.

With the youngest, Mini Me, he used to have a hard time going to sleep by himself.  He would go to bed earlier than the other kids and would fight to be able to stay up and play with them.

If I left him to go to sleep by himself, it would inevitably turn out that he was still awake when his brother, and roommate, came to bed.  Then they would both be up for hours.

So a few years ago, we started putting him to bed a few minutes earlier and reading to him as he fell asleep.

It turned out to be the perfect solution for quiet down time, time together alone, and to get him to go to bed without a problem.  (It's also fostered in him a love of reading that has amazed me.)

Now that he's almost eleven, we still take a few moments to read together every night.  It's one of my favorite times of day.  I love to read these fun adventure books, and we get to talk about all kinds of imagination ideas, plot twists, and it even brings out things that have happend to him during the day that he didn't tell us.

When we try to find a book to read together, we are kind of picky since it has to be one that he'll enjoy and I'll enjoy.  Today I wanted to share some of our favorite series to read if you have a ten year old in your house. 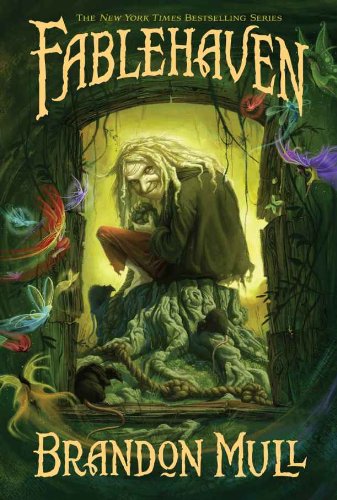 For centuries, mystical creatures of all description were gathered to a hidden refuge called Fablehaven to prevent their extinction. The sanctuary survives today as one of the last strongholds of true magic in a cynical world. Enchanting? Absolutely. Exciting? You bet. Safe? Well, actually, quite the opposite. . .
Kendra and her brother Seth have no idea their grandfather is the current caretaker of Fablehaven. Inside the gated woods, ancient laws give relative order among greedy trolls, mischievous satyrs, plotting witches, spiteful imps, and jealous fairies. However, when the rules get broken, an arcane evil is unleashed, forcing Kendra and Seth to face the greatest challenge of their lives. To save her family, Fablehaven, and perhaps the world, Kendra must find the courage to do what she fears most. 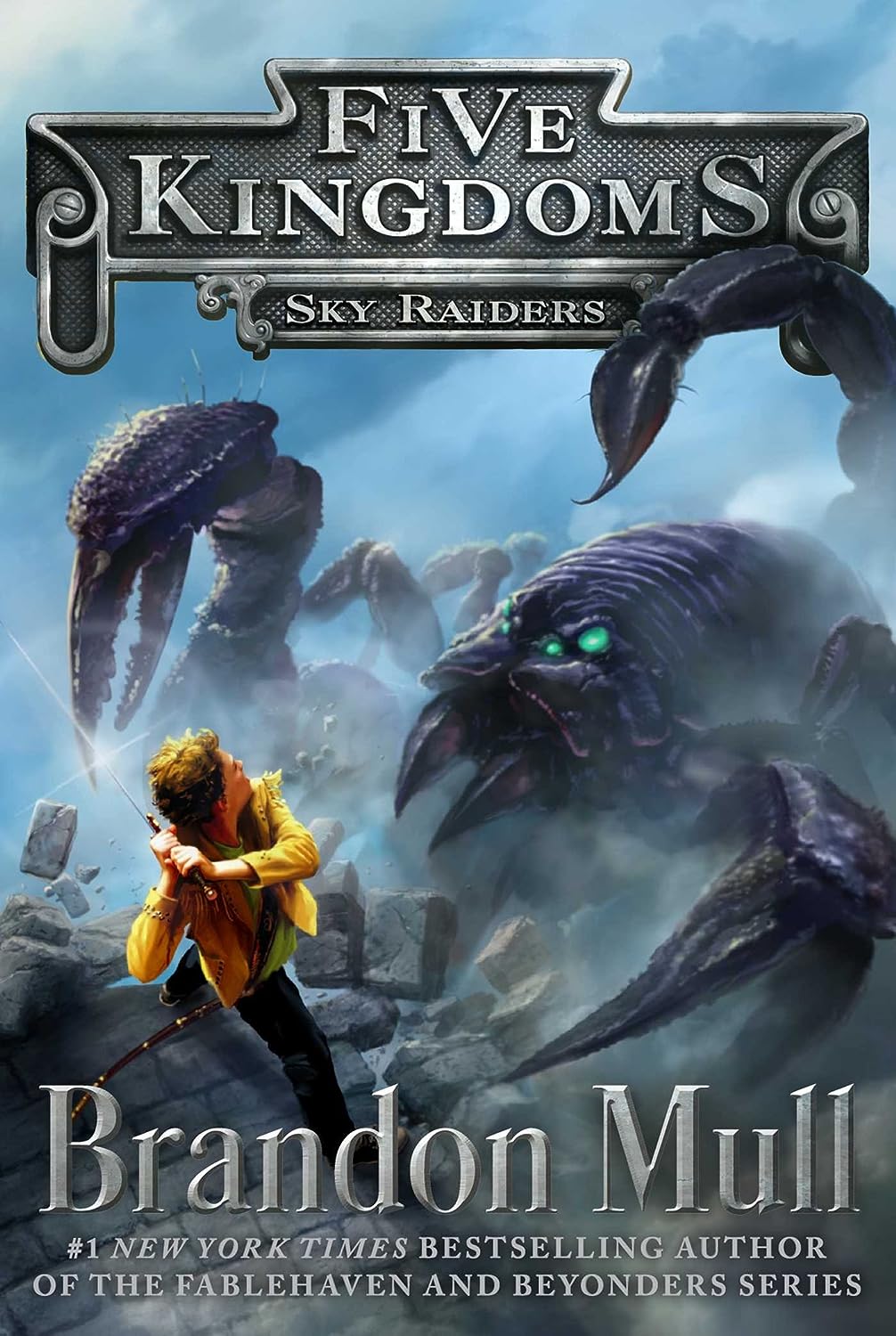 Cole Randolph was just trying to have a fun time with his friends on Halloween (and maybe get to know Jenna Hunt a little better). But when a spooky haunted house turns out to be a portal to something much creepier, Cole finds himself on an adventure on a whole different level.

After Cole sees his friends whisked away to some mysterious place underneath the haunted house, he dives in after them—and ends up in The Outskirts. The Outskirts are made up of five kingdoms that lie between wakefulness and dreaming, reality and imagination, life and death. It’s an in-between place. Some people are born there. Some find their way there from our world, or from other worlds.

And once you come to the Outskirts, it’s very hard to leave.

With the magic of the Outskirts starting to unravel, it’s up to Cole and an unusual girl named Mira to rescue his friends, set things right in the Outskirts, and hopefully find his way back home…before his existence is forgotten. 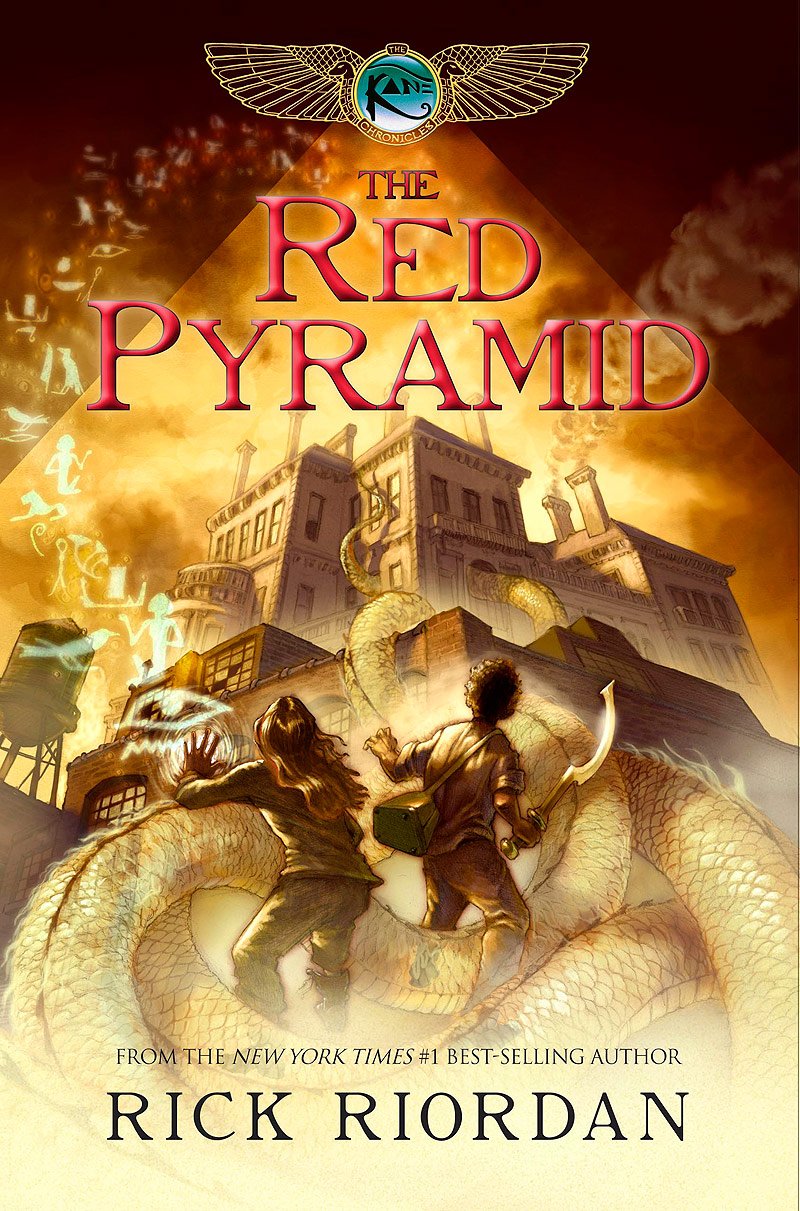 Since their mother's death, six years ago, 12-year-old Sadie Kane has lived in London with her maternal grandparents while her older brother, 14-year-old Carter, has traveled the world with their father, a renowned African American Egyptologist. In London on Christmas Eve for a rare evening together, Carter and Sadie accompany their dad to the British Museum, where he blows up the Rosetta Stone in summoning an Egyptian god. Unleashed, the vengeful god overpowers and entombs him, but Sadie and Carter escape. Initially determined to rescue their father, their mission expands to include understanding their hidden magical powers as the descendants of the pharaohs and taking on the ancient forces bent on destroying mankind. The first-person narrative shifts between Carter and Sadie, giving the novel an intriguing dual perspective made more complex by their biracial heritage and the tension between the siblings, who barely know each other at the story's beginning

Heroes of Olympus by Rick Riordan

After saving Olympus from the evil Titan lord, Kronos, Percy and friends have rebuilt their beloved Camp Half-Blood, where the next generation of demigods must now prepare for a chilling prophecy of their own: Seven half-bloods shall answer the call, To storm or fire the world must fall. An oath to keep with a final breath, And foes bear arms to the Doors of Death.

Now, in a brand-new series from blockbuster best-selling author Rick Riordan, fans return to the world of Camp Half-Blood. Here, a new group of heroes will inherit a quest. But to survive the journey, they'll need the help of some familiar demigods. 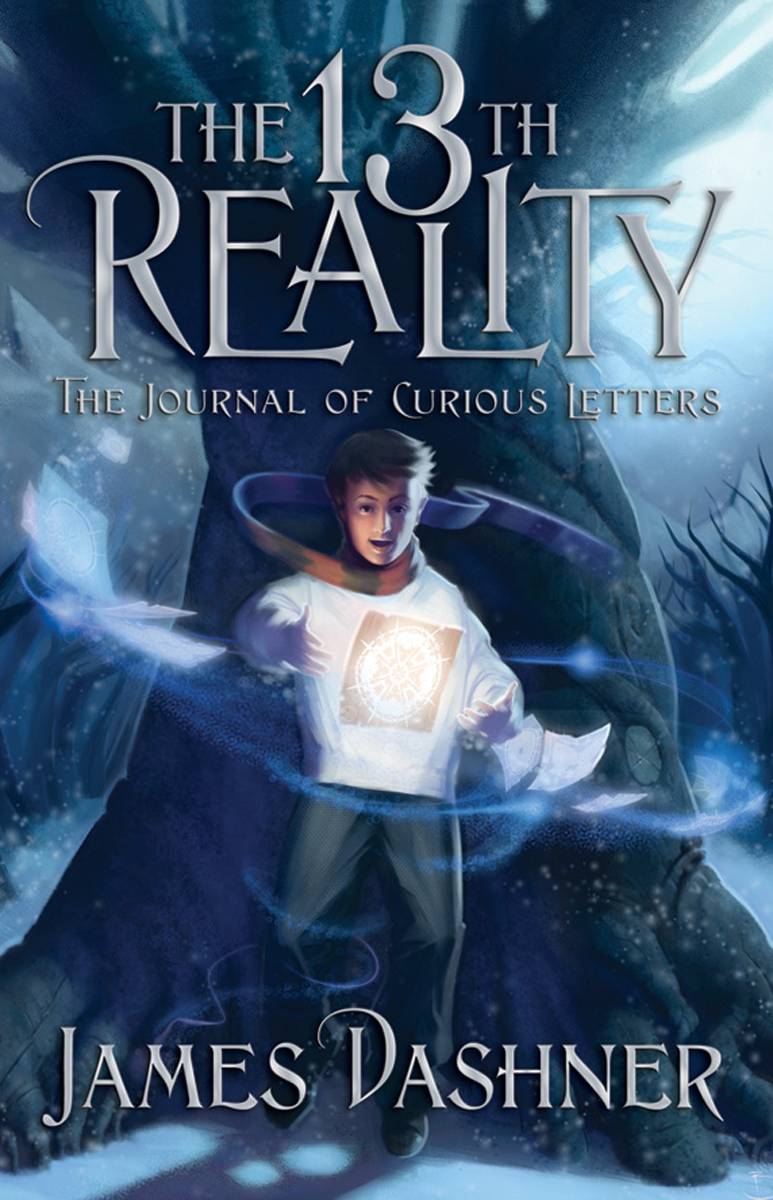 The 13th Reality by James Dashner

What if every choice you made created an alternate reality? What if those realities were in danger? What if it were up to you to save all the realities—and in turn, the entire universe?

Thirteen-year-old Atticus Higginbottom, aka Tick, faces these very questions as he embarks on a series of adventures that cross time and space in the acclaimed The 13th Reality series. 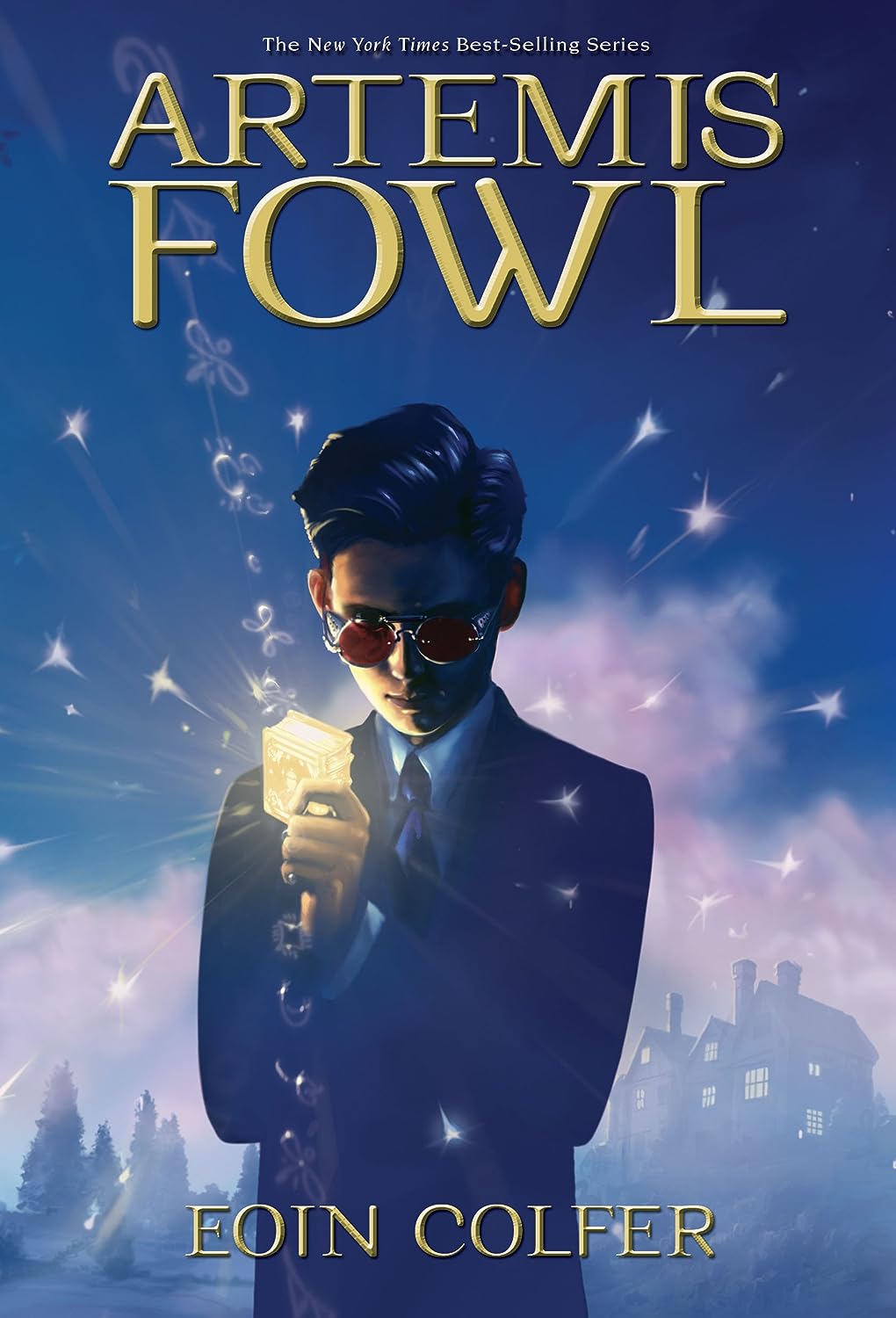 Twelve-year-old Artemis is a millionaire, a genius-and above all, a criminal mastermind. But Artemis doesn't know what he's taken on when he kidnaps a fairy, Captain Holly Short of the LEPrecon Unit. These aren't the fairies of the bedtime stories-they're dangerous! 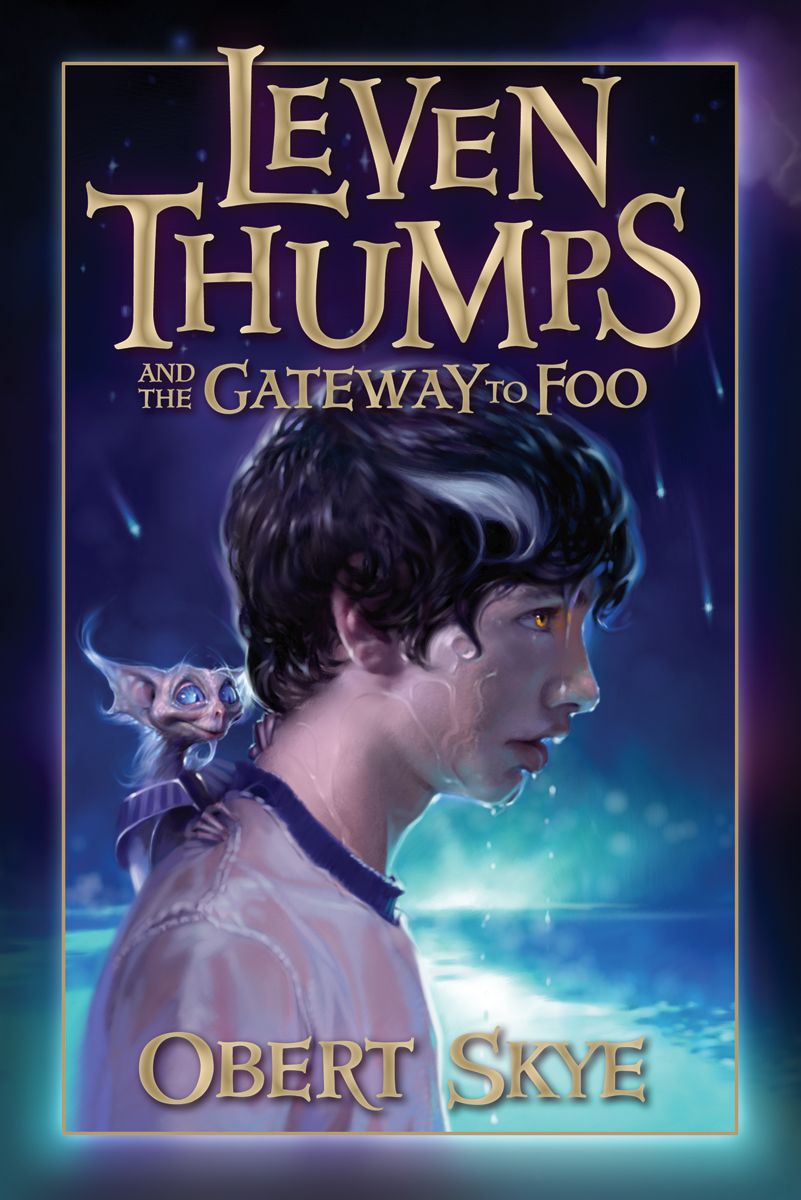 "Fourteen-year-old Leven Thumps (a.k.a. "Lev") lives a wretched life in Burnt Culvert, Oklahoma. But his life is about to change and his destiny be fulfilled as he learns about a secret gateway that bridges two worlds -- the real world and Foo, a place created at the at the beginning of time in the folds of the mind that makes it possible for mankind to dream and hope, aspire and imagine. But Foo is in chaos, and three transplants from that dreamworld have been sent to retrieve Lev, who alone has the power to save Foo.

Enter Clover, a wisecracking, foot-high sidekick; Winter, a girl with a special power of her own; and Geth, the rightful heir to Foo. Their mission: to convince Lev that he has the power to save Foo. Can this unique band of travelers help Lev overcome his doubt? Will Lev find the gateway in time? Or will Sabine and his dark shadows find the gateway first and destroy mankind?" 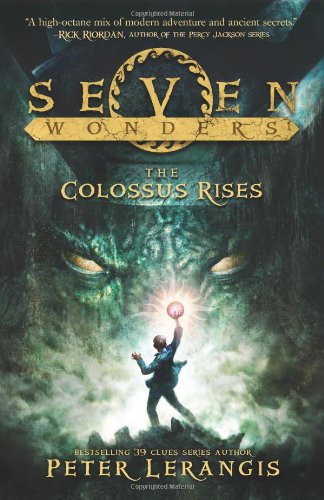 Percy Jackson meets Indiana Jones in the New York Times bestselling epic adventure Seven Wonders! The Colossus Rises is the first book in a seven-book series. This first installment chronicles the story of Jack McKinley, an ordinary kid with an extraordinary problem. In a few months, he’s going to die—unless he finds seven magic Loculi that have been hidden in the Seven Wonders of the Ancient World. 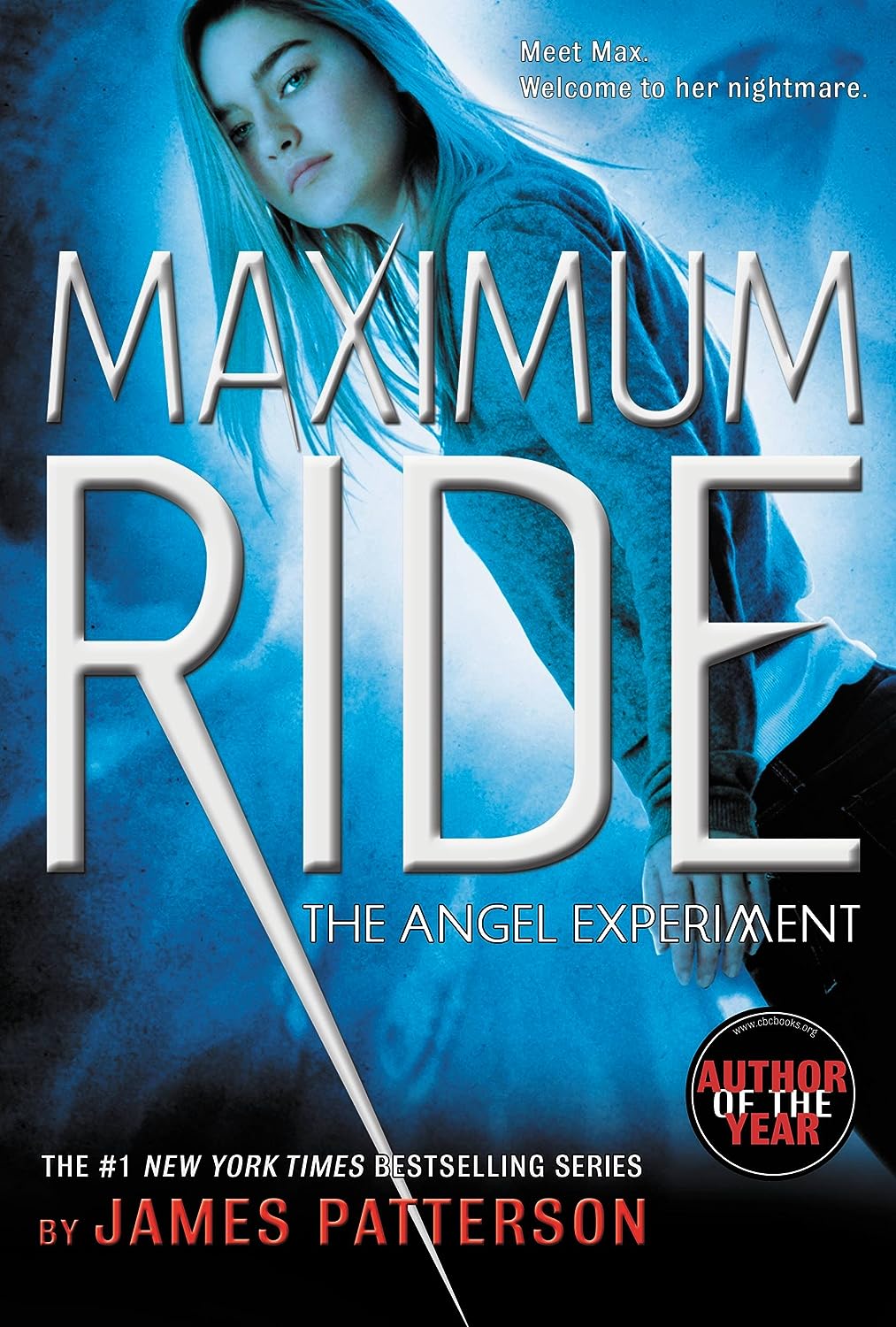 In James Patterson's blockbuster series, fourteen-year-old Maximum Ride, better known as Max, knows what it's like to soar above the world. She and all the members of the "flock"--Fang, Iggy, Nudge, Gasman and Angel--are just like ordinary kids--only they have wings and can fly. It may seem like a dream come true to some, but their lives can morph into a living nightmare at any time...like when Angel, the youngest member of the flock, is kidnapped and taken back to the "School" where she and the others were experimented on by a crew of wack jobs. Her friends brave a journey to blazing hot Death Valley, CA, to save Angel, but soon enough, they find themselves in yet another nightmare--this one involving fighting off the half-human, half-wolf "Erasers" in New York City. Whether in the treetops of Central Park or in the bowels of the Manhattan subway system, Max and her adopted family take the ride of their lives. Along the way Max discovers from her old friend and father-figure Jeb--now her betrayed and greatest enemy--that her purpose is save the world--but can she? 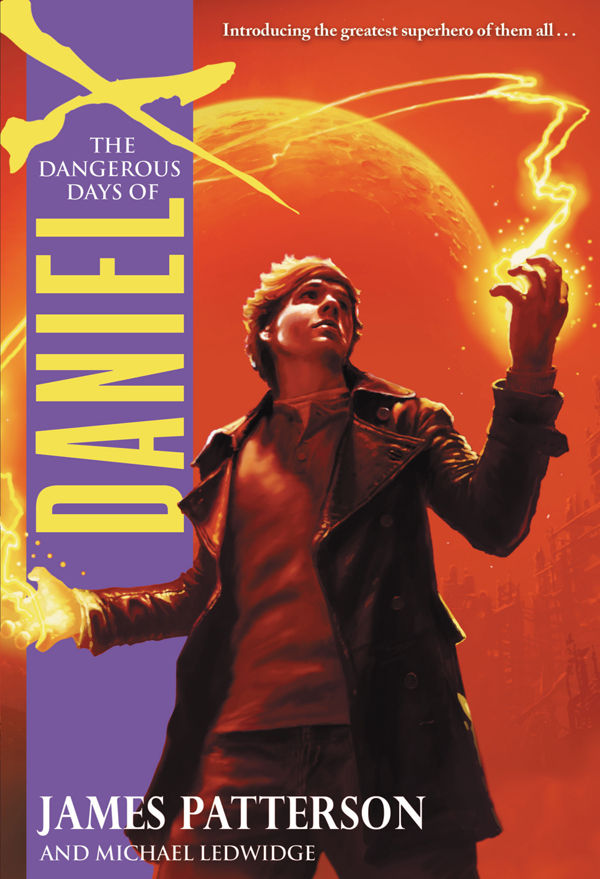 The Dangerous Days of Daniel X by James Patteson

He may be just a kid, but Daniel is strong enough to fight anything in the world. And it's a good thing, because not many guys you meet have a host of deadly criminals hunting them to the ends of the Earth. And none of them are extraterrestrials.

Daniel is the only one who might be able to eliminate every last intergalactic evil on the List of Alien Outlaws on Terra Firma. Because the greatest superpower isn't to be part spider and part man, or to cast magic spells - the ultimate gift is the power to create." 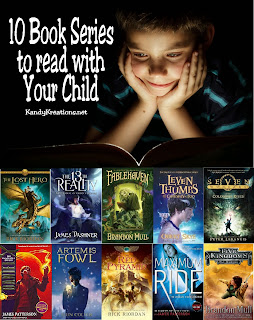 As you can tell, there are certain authors that we have really grown to love.  There are other series that he likes that I'm not a fan of (39 Clues) and others that I like that I'm not sure he would (Inkheart).  But we do love to read these books together for some awesome family time.

Do you read with your kids?  What are your favorite book series?
books memory moments top 10 series