January 22, 2017
Enjoy a great Superhero read with lots of paranormal super powers with these 10 Kindle Unlimited books.  You'll find lots to keep you saving the world right from the comfort of your favorite reading chair. 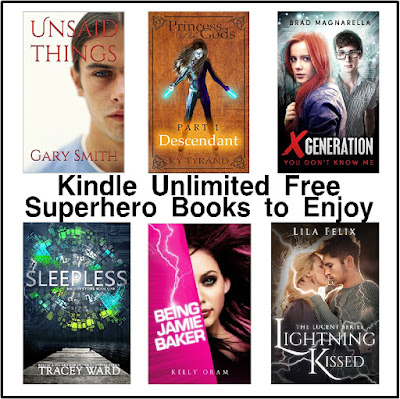 With all the superhero movies in the theaters this week, you'd think we'd be superheroed out (is that a word?)  But it seems the love of super heros and powers just never goes away.
I know that if I could have any power at all, I would love the power to flash anywhere I would love to go in a just a moment's time.  Wouldn't that be awesome?  You could visit anyone and anywhere with just a thought and the possibilities would be endless.
What would your superhero power be if you could have one?
Check out these 10 Kindle Unlimited reads for some great ideas on super powers and the effects they could have on our life if only we could live in the ficitional world.

Camron Scott can see the future.

It's not as cool as you'd think. He can't see anything he's directly involved in, meaning no placing bets on sports events or stocks, or finding his true love. And it's fun trying to explain his power to the cops whenever he tries to stop a disaster in it's tracks. The most recent complication landed him on a plane to sunny California, but at least this move gets him way from his restrictive family and grants him the hope of finding a new home and a new life.

What he doesn’t expect to find is a town seeded with people like himself, people with a special extra something. People like Ashley Garrett.

Ashley is a super freak — charged with speed, strength, and crazy sensory perception. But she wasn't born with these talents. She’s just trying to learn how to live with them, and she’s spent the last year walking a tightrope between maintaining control and losing everything. When Cam has a vision of Ashley attacking some poor dumb kid, he does what he always does — steps in, saves the day, changes the future. And an unlikely partnership is born. He promises to use his ability to watch out for her and make sure she doesn’t lose control, a promise that Ashley is desperate enough to accept. The connection that develops surprises them both.

But the super-powered road never did run smooth. When a series of kidnappings rocks the town, Ashley and Cam must figure out who is behind it all, and how to stop it. As you do when you're super powered — but really all Cam and Ashley want is to find a way to be is Supernormal.

My name is Alex Mills, and I have a superpower.

Don't be jealous, it sucks. I can't control it. My mind is a mutinous SOB that takes over when I go to sleep. I'm just a girl trying to get some shut eye while it decides to throw a rager that can land me just about anywhere in the world.

The base of the Eiffel Tower.
The shore on the coast Ireland.
The third baseline at Wrigley Field.

Sounds exciting and fun, right? Wrong. My not so superpower is unpredictable, uncontrollable and annoying as hell. It's also how I met Nick.

Every cloud has a silver lining. Nick is mine.

Nick is extraordinary as well. He can't feel fear. Never has, never will. It's worked out for him as a PJ in the Air Force, one of the most dangerous jobs in the military, but where it's not helpful is with his social skills. Nick is cold, distant and apathetic.

I first met him when he died and that wasn't even the weirdest moment of our relationship. Neither is this moment here and now, trapped together in an island prison on the Behring Sea. It's a long, strange story between his death and his prison. One full of sheep, docks, Jabberwocks and a very special stone. I could tell it to you'd like to hear it. I've got time...

Wandering the dark streets at night is Russ Becker’s way of dealing with his relentless insomnia and the angst of life. But that changes forever the night he witnesses a strange astronomical event, then discovers he’s developed incredible superpowers.

And he’s not alone. Three others in his town—sexy Mallory, arrogant Jameson, and mysterious Nadia—have had the same experience and acquired intriguing powers of their own. As if Mallory isn't special enough with her good looks and high IQ, now she can control peoples’ minds. Jameson thinks he’s the coolest because he moves objects with his thoughts, and shy Nadia struggles to understand her new empathic abilities.

At first the four secretly relish their newfound gifts while keeping them hidden. However, things get serious when they learn they're being hunted by an organization that wants them for its own nefarious purposes. Russ has always picked his battles wisely, but when the bad guys threaten his family, they're about to find out they messed with the wrong teens. What transpires will change all of them in ways they never imagined.

Being Jamie Baker
by Kelly Oram

An accident that should end in tragedy instead gives seventeen-year-old Jamie Baker a slew of uncontrollable superhuman abilities.

To keep her secret safe Jamie socially exiles herself, earning the title of Rocklin High’s resident ice queen. But during a supercharged encounter with star quarterback Ryan Miller she literally kisses anonymity goodbye.

Now the annoyingly irresistible Ryan will stop at nothing to melt the heart of the ice queen and find out what makes her so special. Unfortunately, Ryan is not the only person on to her secret.

Will Jamie learn to contain her unstable powers before being discovered by the media or turned into a government lab rat?  More importantly, can she throw Ryan Miller off her trail before falling in love with him?

Whisper (The Empaths)
by Phoebe Kitanidis

Fifteen-year-old Joy is used to hearing Whispers—to walking down the street and instantly knowing people’s deepest desires. She uses her psychic gift for good, to make her friends happy and give people what they want.

But for her older sister, Jessica, the family superpower is a curse, and she uses it to make people’s lives—especially Joy’s—miserable.

Still, when Joy hears a mysterious and frightening Whisper from Jessica’s mind, she knows she has to help her sister. Even if it means risking everything and joining forces with a boy she barely knows—a boy who may have a dark secret of his own.

Colby Evans can leap from one country to the next in a heartbeat. She can see every sunset in every time zone in the same day. She can travel across the world in a flash. She defies gravity and physics with every breath she takes. She's tested her abilities and found them limitless.

She is the lightning. She is Lucent. And nothing can stop her.

Theodore Ramsey isn't supposed to be able to flash like Colby. The power of travel is passed on from mother to daughter in their people. Except once in every hundred generations.

Theo is the one.

He can flash like Colby. And it makes him a target to their enemies and to himself. His abilities change everything he knows about life and throws his future into an uncertain tangent. In fact, the only thing certain in his life is the love he feels for Colby.

Their love defies time and space and has been the only constant thing in their lives since childhood. But even their infallible love will be stretched to its limits.

Imagine if you had the ability to change your appearance at will. To alter the color of your hair, eyes, lips, and nails; maybe even your skin? Perhaps give yourself a tan, freckles, or a tattoo. And then swap it again, all in the blink of an eye.

What if you could change your clothes to anything you wanted – that dress you saw in the window; those boots you just couldn’t afford – all with a simple thought?

Suppose your senses were perfect. Better than perfect. You could see and hear and smell more acutely than you ever thought possible. On occasion, you could even glimpse into the future.

You were stronger. Healthier.

You were a Princess. An heir to a Kingdom in a beautiful land.

What if the most powerful warriors in the land wanted you dead, and would stop at nothing to kill you?

Somewhere north of British Columbia, near the Alaskan border, lies an underground government secret facility where incredible advanced technologies are being tested. Also, many experiments are performed on humans as well, such as genetic engineering in attempt of creating a future race of super-humans.

The human patients are purposely left unconscious while many drugs are being tested into their bodies.

The government funded projects proceed as planed, until … one man suddenly awakes to his full conscience and finds a way to break free from the hostile environment.

What if everyone knew what you were thinking?

For fifteen year old Stephen Smart, there's no such thing as being alone with his thoughts. When he discovers that people can hear what he's thinking, Stephen's ordinary life is turned upside down. Now the hot girls know exactly what he thinks of them, his teachers know exactly what he wants to say to them and his relationship with friends and family just became a whole lot more complicated.

Is it the result of a genetic fluke, government conspiracy or mere bad luck? Unable to control his ability and helpless to avoid sharing his innermost thoughts with friends and enemies alike, all Stephen knows is that his life has been changed forever.

Someone's watching...In the fall of 1984, Cold War tensions between Washington and Moscow are close to breaking.

But in sleepy Gainesville, Florida, fourteen-year-old Janis Graystone is mainly worried about starting high school, earning a spot on the varsity soccer team, and keeping her older sister from running her life. And then there are her paranormal experiences. Experiences where she awakens in her backyard — out of her body — with the disturbing sense that someone is watching her.

For Scott Spruel, the start of high school means the chance to start over. And he's willing to ditch everything — computer hacking, Dungeons & Dragons marathons, even his comic book collection (well, except for his X-Men) — if it means getting closer to Janis, the secret love of his life. But what about the eavesdropper on his telephone line, a presence he senses through powers he is only beginning to understand?

As clocks tick down, Janis and Scott will need the other's help. But first they'll have to find one another and that means traversing Thirteenth Street High's caste system … a system that can be as brutal as it is unforgiving.
books superhero