Books being turned into Movies and TV

April 02, 2019
Be sure to read the book before the movie comes out with these books that will soon be made into movies or tv shows.  You don't want to miss a moment with your free time. 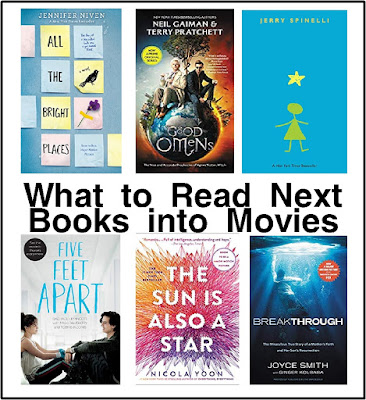 Whether you love them or hate them, movie adaptions of books are a part of life.

Tonight I'm planning to use my Movie Pass to see Five Feet Apart.  It made me wonder what other books I might like that will be turned into movies soon.

So of course, I had to go search and add a bunch of new books to my "To Be Read" list.

Can you love someone you can never touch?
Stella Grant likes to be in control—even though her totally out of control lungs have sent her in and out of the hospital most of her life. At this point, what Stella needs to control most is keeping herself away from anyone or anything that might pass along an infection and jeopardize the possibility of a lung transplant. Six feet apart. No exceptions.
The only thing Will Newman wants to be in control of is getting out of this hospital. He couldn’t care less about his treatments, or a fancy new clinical drug trial. Soon, he’ll turn eighteen and then he’ll be able to unplug all these machines and actually go see the world, not just its hospitals.
Will’s exactly what Stella needs to stay away from. If he so much as breathes on Stella she could lose her spot on the transplant list. Either one of them could die. The only way to stay alive is to stay apart. But suddenly six feet doesn’t feel like safety. It feels like punishment.
What if they could steal back just a little bit of the space their broken lungs have stolen from them? Would five feet apart really be so dangerous if it stops their hearts from breaking too?

To All The Boys I've Loved Before

What if all the crushes you ever had found out how you felt about them…all at once?

Sixteen-year-old Lara Jean Song keeps her love letters in a hatbox her mother gave her. They aren’t love letters that anyone else wrote for her; these are ones she’s written. One for every boy she’s ever loved—five in all.

When she writes, she pours out her heart and soul and says all the things she would never say in real life, because her letters are for her eyes only. Until the day her secret letters are mailed, and suddenly, Lara Jean’s love life goes from imaginary to out of control.

Stephanie Patrick is devastated after her whole family dies in a plane crash. But when she discovers that the downing of flight NE027 wasn’t an accident but an act of terrorism, Stephanie enters the fight of her life to achieve her one goal: revenge.
When she’s recruited by a covert intelligence organization, Stephanie sees a means to an end. Now, with nothing and no one left to lose, Stephanie undergoes rigorous training to become “Petra,” a mercenary terrorist based out of Germany, and “Marina,” an international businesswoman based in London.

Her immersion into the world of international espionage teaches Stephanie how to numb her feelings and act on instinct alone. But as her missions become more brutal, and the stakes grow ever higher, she begins to question everything she knows about flight NEO027. Is her organization telling her the truth about what really happened? Is avenging her family worth the risk of her own life? And if it isn’t, will those who created her ever let her go?

According to The Nice and Accurate Prophecies of Agnes Nutter, Witch (the world's only completely accurate book of prophecies, written in 1655, before she exploded), the world will end on a Saturday. Next Saturday, in fact. Just before dinner.
So the armies of Good and Evil are amassing, Atlantis is rising, frogs are falling, tempers are flaring. Everything appears to be going according to Divine Plan. Except a somewhat fussy angel and a fast-living demon—both of whom have lived amongst Earth's mortals since The Beginning and have grown rather fond of the lifestyle—are not actually looking forward to the coming Rapture.
And someone seems to have misplaced the Antichrist . . .

There was the time before Tessa met Hardin, and then there’s everything AFTER... Life will never be the same. #Hessa

Tessa is a good girl with a sweet, reliable boyfriend back home. She’s got direction, ambition, and a mother who’s intent on keeping her that way.

But she’s barely moved into her freshman dorm when she runs into Hardin. With his tousled brown hair, cocky British accent, and tattoos, Hardin is cute and different from what she’s used to.

But he’s also rude—to the point of cruelty, even. For all his attitude, Tessa should hate Hardin. And she does—until she finds herself alone with him in his room. Something about his dark mood grabs her, and when they kiss it ignites within her a passion she’s never known before.

He'll call her beautiful, then insist he isn’t the one for her and disappear again and again. Despite the reckless way he treats her, Tessa is compelled to dig deeper and find the real Hardin beneath all his lies. He pushes her away again and again, yet every time she pushes back, he only pulls her in deeper.

Tessa already has the perfect boyfriend. So why is she trying so hard to overcome her own hurt pride and Hardin's prejudice about nice girls like her?

Through the years and the struggles, when life seemed more about hurt and loss than hope and mercy, God was positioning the Smiths for something extraordinary--the death and resurrection of their son.

When Joyce Smith's fourteen-year-old son John fell through an icy Missouri lake one winter morning, she and her family had seemingly lost everything. At the hospital, John lay lifeless for more than sixty minutes. But Joyce was not ready to give up on her son. She mustered all her faith and strength into one force and cried out to God in a loud voice to save him.

In the coming days, John would defy every expert, every case history, and every scientific prediction. Sixteen days after falling through the ice and being clinically dead for an hour, he walked out of the hospital under his own power, completely healed.

Victoria McQueen has an uncanny knack for finding things: a misplaced bracelet, a missing photograph, answers to unanswerable questions. When she rides her bicycle over the rickety old covered bridge in the woods near her house, she always emerges in the places she needs to be.
Charles Talent Manx has a gift of his own. He likes to take children for rides in his 1938 Rolls-Royce Wraith with the vanity plate NOS4A2. In the Wraith, he and his innocent guests can slip out of the everyday world and onto hidden roads that lead to an astonishing playground of amusements he calls Christmasland. The journey across the highway of Charlie's twisted imagination transforms his precious passengers, leaving them as terrifying and unstoppable as their benefactor.
Then comes the day when Vic goes looking for trouble...and finds her way to Charlie. That was a lifetime ago. Now, the only kid ever to escape Charlie's evil is all grown up and desperate to forget. But Charlie Manx hasn't stopped thinking about Victoria McQueen. On the road again, he won't slow down until he's taken his revenge. He's after something very special—something Vic can never replace.


As a life-and-death battle of wills builds, Vic McQueen prepares to destroy Charlie once and for all—or die trying.

The Sun is Also a Star

Natasha: I’m a girl who believes in science and facts. Not fate. Not destiny. Or dreams that will never come true. I’m definitely not the kind of girl who meets a cute boy on a crowded New York City street and falls in love with him. Not when my family is twelve hours away from being deported to Jamaica. Falling in love with him won’t be my story.

Daniel: I’ve always been the good son, the good student, living up to my parents’ high expectations. Never the poet. Or the dreamer. But when I see her, I forget about all that. Something about Natasha makes me think that fate has something much more extraordinary in store—for both of us.

The Universe: Every moment in our lives has brought us to this single moment. A million futures lie before us. Which one will come true?

Twelve-year-old Artemis is a millionaire, a genius-and above all, a criminal mastermind. But Artemis doesn't know what he's taken on when he kidnaps a fairy, Captain Holly Short of the LEPrecon Unit. These aren't the fairies of the bedtime stories-they're dangerous!

The Woman in the Window


It isn’t paranoia if it’s really happening . . .
Anna Fox lives alone—a recluse in her New York City home, unable to venture outside. She spends her day drinking wine (maybe too much), watching old movies, recalling happier times . . . and spying on her neighbors.
Then the Russells move into the house across the way: a father, a mother, their teenage son. The perfect family. But when Anna, gazing out her window one night, sees something she shouldn’t, her world begins to crumble—and its shocking secrets are laid bare.
What is real? What is imagined? Who is in danger? Who is in control? In this diabolically gripping thriller, no one—and nothing—is what it seems.

Theodore Finch is fascinated by death, and he constantly thinks of ways he might kill himself. But each time, something good, no matter how small, stops him.

Violet Markey lives for the future, counting the days until graduation, when she can escape her Indiana town and her aching grief in the wake of her sister’s recent death.

When Finch and Violet meet on the ledge of the bell tower at school, it’s unclear who saves whom. And when they pair up on a project to discover the “natural wonders” of their state, both Finch and Violet make more important discoveries: It’s only with Violet that Finch can be himself—a weird, funny, live-out-loud guy who’s not such a freak after all. And it’s only with Finch that Violet can forget to count away the days and start living them. But as Violet’s world grows, Finch’s begins to shrink.

Stargirl. From the day she arrives at quiet Mica High in a burst of color and sound, the hallways hum with the murmur of “Stargirl, Stargirl.”

She captures Leo Borlock’ s heart with just one smile. She sparks a school-spirit revolution with just one cheer. The students of Mica High are enchanted. At first.

Then they turn on her. Stargirl is suddenly shunned for everything that makes her different, and Leo, panicked and desperate with love, urges her to become the very thing that can destroy her: normal. 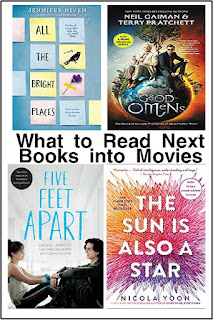