April 07, 2020
You get to be the villains and defeat the heroes while having a fun family game night with this Disney Villainous game.  Check out this overview and tips to start playing with your family. 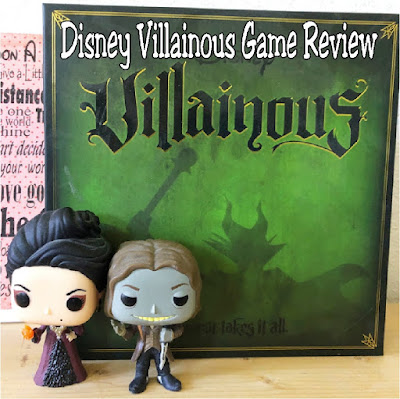 Have you ever wanted to be the villain? Or rooted for him/her to win?

Just me then, huh.  (awkward moment)

Well, now you can join me on the dark side and root for the villains to win for once with Disney's Villainous game. 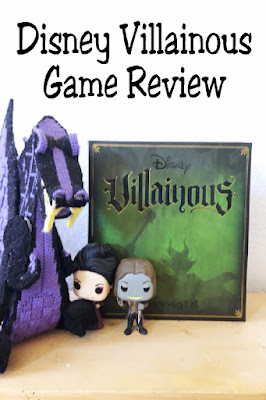 With this great group game (for 2-6 players), you take on the role of your favorite Disney villain and try to beat the heroes in your own story-based objectives.

In the original Disney Villainous game, you can choose to be Maleficent, the Queen of Hearts, Jafar, Ursula, Prince John, or Captain Hook.  With add on versions, you can add other evil characters and keep the fun going.

In this fun family game, you race against the other players to beat the heroes of your story and achieve your objective before the other players in the game.  During your turn, you try to advance your character's story line while trying to keep the other villains from advancing.

Are you confused yet? 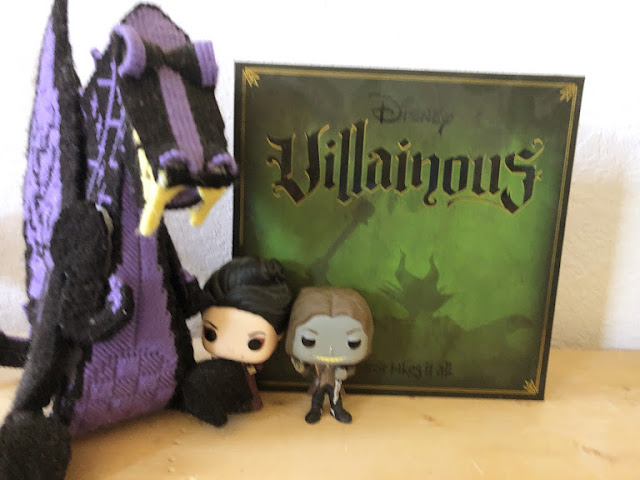 I admit, this game was a little difficult to understand and it wasn't until the third time through that we were able to understand all the little nuances and secrets to play.  And that only worked because we all stayed with the same character.  If you were to switch up characters, you might have a longer learning curve since each character has different objectives, strengths, and weaknesses.

Each character comes with its own customized game board representing the Realm for their story line.  You also get a villain mover to move around the board between each of the 4 locations for your character. There are personalized cards for each villain that include Fate Cards and Villain Cards.  With the help of the villain cards, you can defeat the Fate cards that have the heroes which will try to stop you.

Each player can play using the different actions available at whatever location within their realm they are at.  But if a hero block some of the actions by covering them, you can't use those until you defeat the hero using your allies and item cards.

Since each villain has different needs, I'll try to explain each one, but you will have to figure out your own strategy. 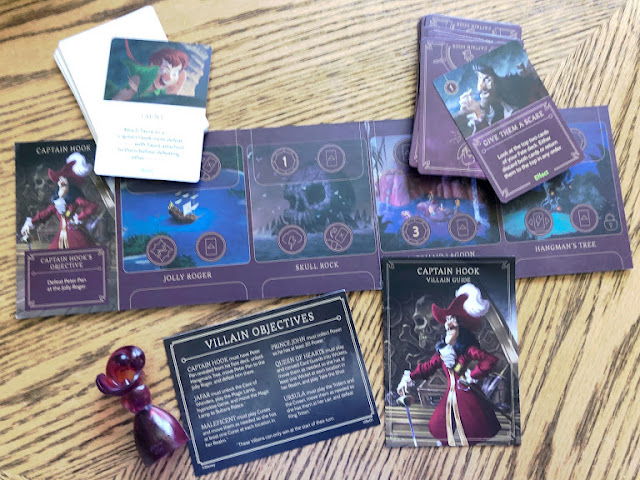 Once it's your turn, you start play by moving your villain to a new location on your board.  The Captain Hook realm includes the Jolly Roger, Skull Rock, Mermaid Lagoon, and Hangman's Tree.  Every time you play, you need to move your character to a spot adjacent to the one you finished your last turn on.

Captain Hook's objective is to beat Peter Pan at the Jolly Roger.

To do this, he has to find Peter Pan in his hero card deck (through using the different play actions on each location), unlock the Hangman's Tree location so he can move Peter all the way to the Jolly Roger, and then defeat him by using Allies and Item cards.

Of course, you need to do all this while keeping the other players from adding more heroes to your locations and by keeping them from winning their stories. 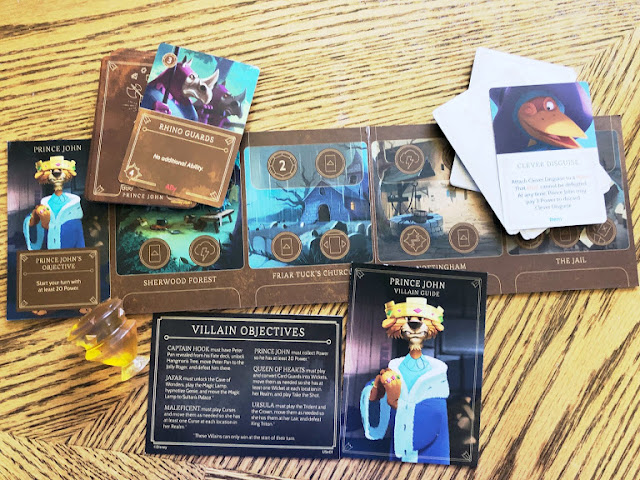 Prince John is all about greed, so for his objective he has to accumulate Power coins and get 20 at the start of his turn.  So even if he ends his turn with 20, other players can still play fates against him on their turn to cause him to lose power.  He must start his turn with 20 coins to win.

If you are against Prince John, then you want to watch how fast he gains power coins since there are a few cards that allow him to do so even on other people's turn.  That adds up fast.  You want to find fate cards and heroes that cause him to use his coins. 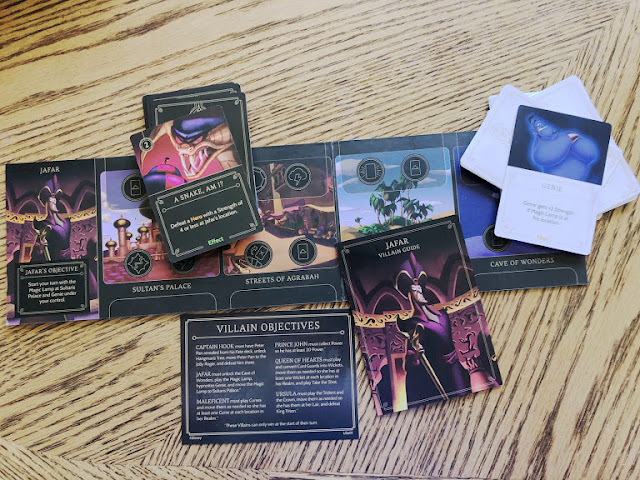 We didn't play with Jafar too much so I don't know all the tricks but keep an eye on whether he has genie under his control and whether his Cave is unlocked as once this happens, he can move things along fast. 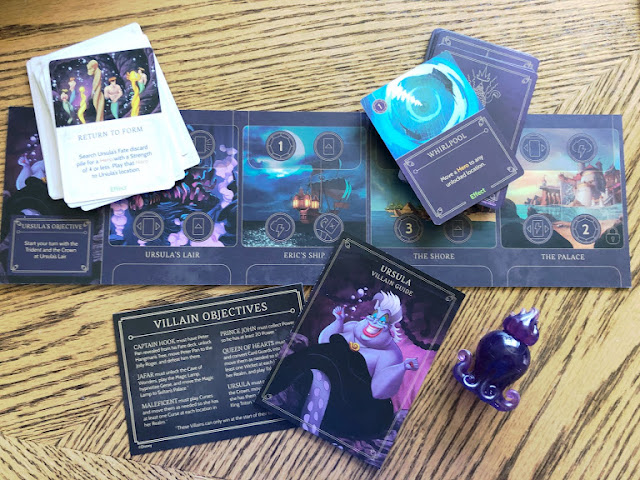 Ursula can only win at the start of her turn just like Prince John.  So keep an eye on her and what items she has where since her goal is to win the Trident and the Crown and have them on the lower side of the board.  You can stop her by moving the crown to the top side with fate cards.

Her realm includes Ursula's Lair, Eric's ship, The Shore, and The Palace.  The palace starts out as locked, so she must unlock that and move the items around while defeating King Triton and the other heroes. 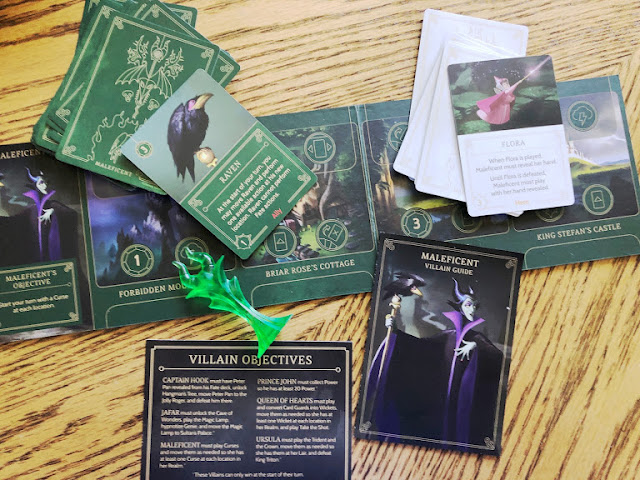 To win, Maleficent has to start her turn with a Curse on each location of her board.  Maleficent is the only villain with curse cards and each has an ability to hurt the hero at that location. So she has to decide when and where to use the curses to hurt the villains without hurting her play chances. 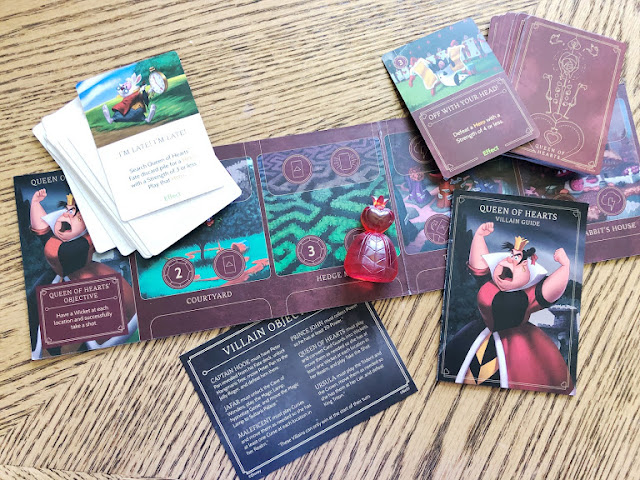 As an opponent of the Queen of Hearts, I had a hard time keeping track of what she was doing enough to try and stop her.  She has to create wickets out of the cards and then use them to take a shot through the wickets.  Depending upon the randomness of the cards, she can succeed in her shot or she can fail.  That makes it a little hard to stop and keep track of here.

Her realm includes the Courtyard, the Hedge Maze, Tulgey Wood, and the White Rabbit's House. 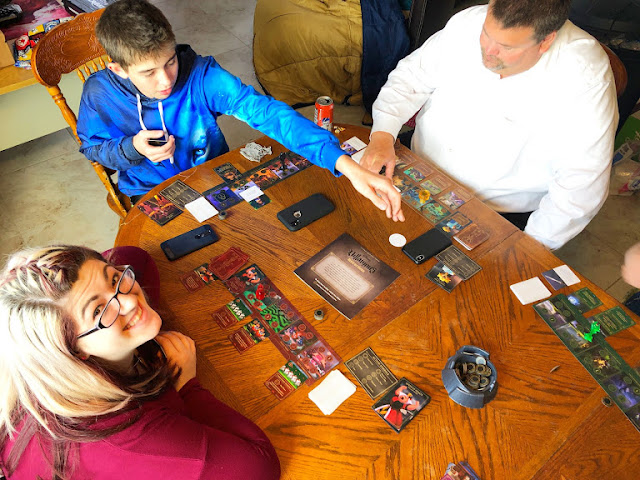 Depending upon which villain you play, will decide how you play Disney Villainous and win.  Each turn has different cards that you can play that both affect you and the other villains around you.

We had a good time playing this game.  The only family argument we actually had was while trying to figure out how the cards were all to be played.  I think that was a time issue since it took a long time to figure out each person's turn and a few villains has a bit of a temper when other's blocked their play.

We do recommend playing this game if you're looking for a different family game than the traditional board games available out there.  It's probably not a good one for small kids.  I would recommend only playing with 12 or older since the game play can be very strategic and slow.

We can't wait to get together and try some of the other characters in the expansion packs now!