July 07, 2008
It's been a crazy last few weeks. After dealing with the flood and all the complications that has brought into our lives, we really wanted to kick back and enjoy a break. What better way than to gather with friends, eat LOTS of food, and blow things up? Gotta admit that after everything, the blowing things up sounded the best to me! Since we couldn't blow the house up or an insurance company, we enjoyed some home fireworks instead.
The kids were very antsy all day to go. We had MORE rain that morning and were afraid the festivities would be cancelled. Zach got up early (for him...he's my LATE sleeper) and got dressed by himself. I'm not sure if he was hoping the rain would turn to snow, or if he just has his mother's genes and is cold all the time! 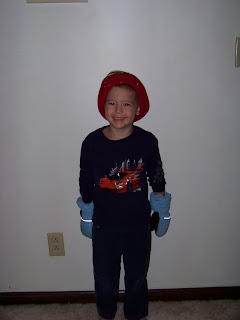 The rain finally stopped and we gathered at a friend's home for the holiday and enjoyed a wonderful BBQ. There was so much food and it was nice to see old friends and meet some new. We have been so blessed to have some awesome friends since moving to Terre Haute and it was great to spend time with them. Plus, enjoying all their favorite BBQ foods was a great plus! I think the kids loved getting together the most! 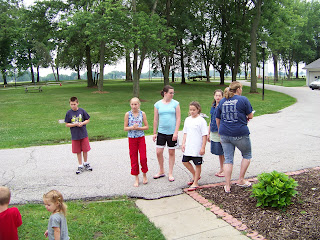 I know Josh was expecially thrilled to have the party because the Green family was invited. That meant that Abby got to come! He just loves Abby and is convinced he is going to marry her. We have found them slow dancing behind the curtains at church and they've even shared their first kiss. (We finally had to put a stop to that one!) So he was pretty excited to have her show up. We even found evidence of how thrilled they were to see each other again all over the front sidewalks for all the world to see! 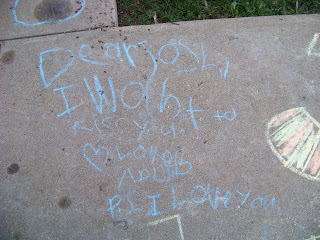 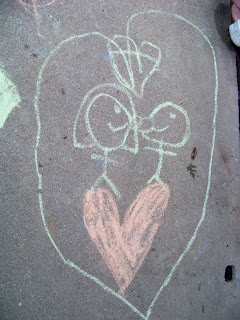 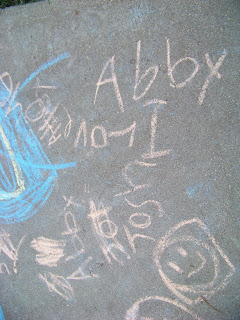 After enjoying all the food and company, we took the kids out to the softball fields in front of our friend's house and lit sparklers. That was quite a feat with 20 kids! The kids all enjoyed the sparklers, even Zach who decided to try and light his chest on fire. He was playing with a sparkler when it burnt his fingers, so he flicked it and a piece of the sparkler went down his shirt. He blistered and burnt pretty good, but barely slowed down.
After the sparklers, we enjoyed a wonderful show with some awesome fireworks! We got just a "few" to shoot off and they were better than some of the shows we've seen. 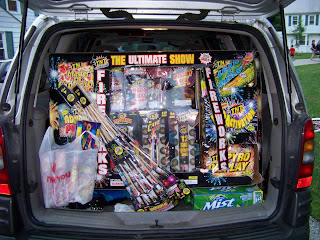 We had a really awesome time. We even were treated to a second show. We got to watch Josh and Abby throughout the fireworks. They sat with Josh's arm around her the whole show. It was quite a show! And the girls spent the evening using the leftover sparklers to dress up their hair. We had a really fun night. What a great way to spend the holiday! 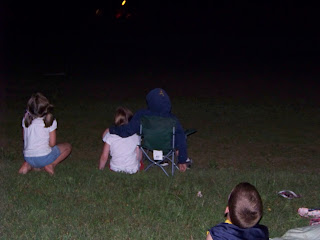 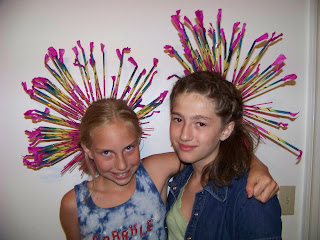