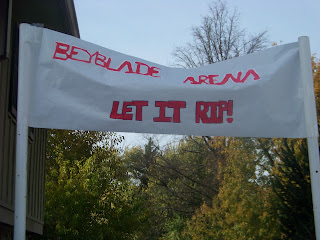 My middle son turned 10 this year and in our house, we try to only have birthday parties on the even years.  I haven't been very good at that since moving to Indiana, but I was determined to give it a go this year since I've had such fun throwing parties lately.
We had originally planned to have a Rock Star theme party, but when HouseParties.com picked us to host their Beyblade party, we were thrilled and immediately changed our theme to Beyblade.  (If you haven't heard of HouseParties.com you are certainly need to check them out!)
I didn't know much about Beyblade in the beginning, other than they were tops.  My son has always had a facination for tops since he was little.  He used to use Legos to build these elaborate, amazing tops to challenge his brothers in the kitchen.  Some of them were pretty big and spun fast!  But I digress...
We decided to use our Beyblade party as his theme.  We started out with a red, white, and blue color palet.  That was pretty easy since we had a whole bunch of decorations from our 4th of July family reunion party.  With the competition aspect of the party, we even got to use our red, white, and blue flag pennet banner!  LOVE IT! 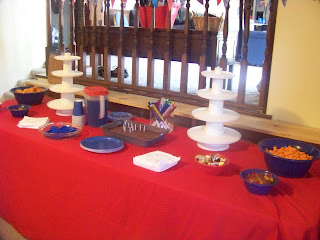 We started off the party with a craft to keep the boys busy while everyone arrived.  We used a big bucket of Legos and my son showed the boys how to build tops with them.  It didn't go quite as well as I planned since everyone was distracted by the Beyblades sitting on the shelf.  But the idea was there and my boys loved it.  My oldest and youngest sons even got into the action. 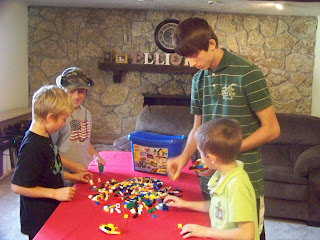 After everyone arrived, we watched an Intro to the cartoons and game DVD that came with our party pack.  It explained the characters from the TV show and the rules of the game.  It helped since everyone wasn't familiar with how it all worked. 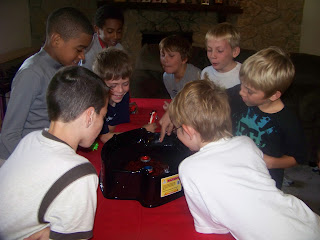 Then, we LET IT RIP!  The boys challenged each other in a single elimination tournament where each boy played best 2 out of 3.  The winning boy got to take home his choice of Beyblade (House Party sent us 5.)  We took a break after the first tournament and had cake and ice cream.  Although the boys wanted to keep playing instead.
After eating and opening gifts, we played the tournament again.  When it was time for the boys to go home, they each got to play "tops" on our trampoline.  It got a little out of control but wore them out alot! 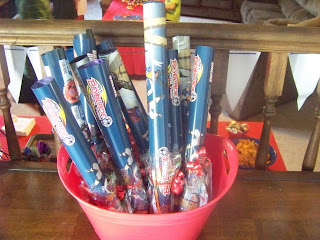 As the boys left they each got a goodie bag filled with suprises from us and House Party.  The goodie bags had a poster, a coupon for Beyblades, a glow stick, some candy treats, and a Beyblade notebook that I made for each.
It was a fun party and I'm so glad to have won it!  Thanks House Party and Beyblade!
Linking up HERE and at Spaceships & Laserbeams.
birthday party