January 12, 2011
I LOVE, LOVE, LOVE cupcakes.
I don't know what it is about them, but I love them.  The funny thing is--I hate cake.  I really don't like it at all.  There's too much "stuff" and not enough frosting.  That probably doesn't make any sense at all, but I don't know how else to explain it.  But with a cupcake it just seems to be the right proportions....and they are so cute.
You can do just about anything with a cupcake.  You can decorate it to look like anything.  Especially if you use fondant.  I don't like the taste of fondant, so my cupcakes have LOTS and LOTS of yummy frosting on them as decorations.
I wanted to share some Snowman cupcakes that you can make for your own snowman party.  You don't need any fondant skills or fancy machines, only lots of frosting and sweet candy!
Here are a few that the kiddos and I made this weekend: 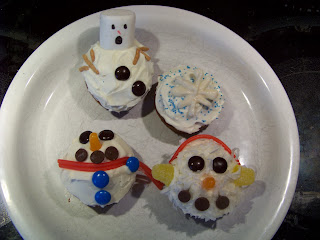 I was trying to figure out which I liked best to feature on my dessert table so we had to make a few different varieties.
I love the melted snowman one with his "OH NO!" face in the upper left corner. He's just too cute.  He simply has a marshmallow head with edible markers to draw his face.  I didn't have any pretzels in the house, so we used Choy Mein noodles for arms and M&Ms for his buttons.
The next one on the upper right hand corner was the "yummiest" one for me.  The cupcake itself is really simple.  It is simply frosted with white frosting (we used Cream Cheese because it our favorite flavor)then added some blue sugar sprinkles on top. 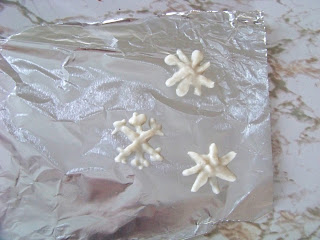 I love white chocolate and tried to pipe some melted chocolate into snowflake shapes.  It didn't go too well.  I tried to pipe it with a snipped off end of a Ziploc bag.  I hear all the time how well that works, but it didn't go so well for me.  I think next time, I'll actually try using a decorating tip for a better snowflake.  But it sure tasted yummy!
The next one on the bottom left is a frosted cupcake with a snowman body.  I used some pull apart twizzlers to make a scarf and put it across the upper 2/3 area of his body.  Below that I placed 3 M&Ms for his buttons while above that is his cute face.  There isn't a lot of room to work with up there, so his face was kind of "squished."  But I think it works for him.  His face is made from M&Ms for his eyes, a Mike & Ike for his nose, and 3 chocolate chips turned upside down for his mouth.
The last one is my favorite.  I think this one is the winner. 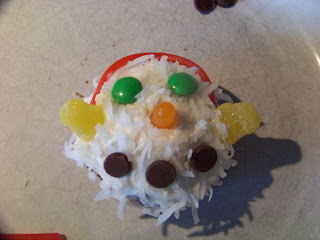 I frosted the cupcake as normal, but then dipped his face into a bowl of flaked coconuts.  This gave him more of a textured face.
Then, I added some leftover spice drops on the outer edges of the center of the cupcake for ear muffs.  To complete the ear muffs, I separated a piece of a pull apart licorice and stuck it in the cupcake just above the gum drops.  I cut the licorice so it was long enough to just lightly rest along the edge of the cupcake wrapper.
For his face, I used green, blue, and brown M&Ms to match eye colors of the guests.  The noses were orange Mike & Ikes.  The mouths are 3 chocolate chips turned upside down and pressed into the snowman's face.  This was a little tricky when the coconut was a little more dense in the center of the cupcake, so you may have to work at it a little.
These cupcakes are really pretty easy, and kinda fun once you get started.
cupcake snowman