March 04, 2011
You know those projects where in your head they looked AMAZING!?!?
This was one of those...I had some cool ideas, but when it came to execution...it didn't quite come out right. Even my beautifully sunlit room didn't cooperate today.  SIGH.
But it still turned out good and I'm ready for our Sock Hop birthday party. 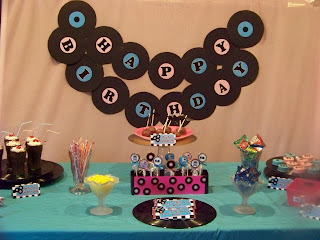 I started the table with a turquoise blue tablecloth.  I used the same style as I used on the Sock Hop Dinner Table scape.  Easy, simple, and cheap.  Behind the tablecloth I placed a pale pink backdrop.  I purchased this backdrop on clearance at Walmart a few months ago.  I thought it would be pretty for "something", and it worked great here. 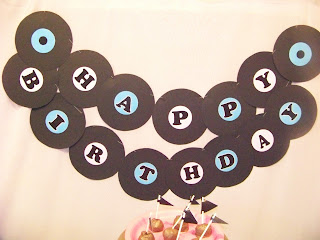 For the birthday banner I had every intention of using real 45 RPM records.  But time and money got away from me.  So instead I cut out circles from black card stock and glued letter circles in the party's color turquoise and pink.  Then I strung them using thread to minimize the appearance of the banner hanging instrument. 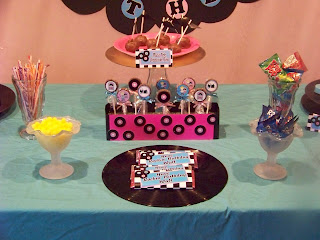 The center of my table is my 50s candy area.  In the soda shop jars are candies that were popular during the 1950s. 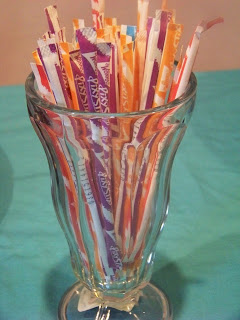 I have Pixy Stix 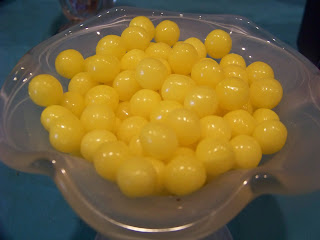 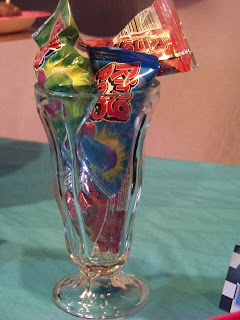 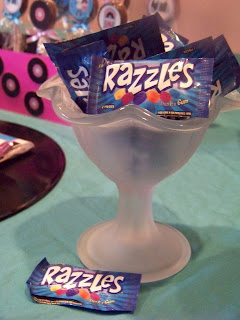 In the center of those are personalized Hershey candy bars for the birthday boy, 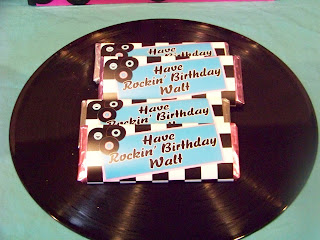 and chocolate suckers with 50s themed sticker labels on the front. 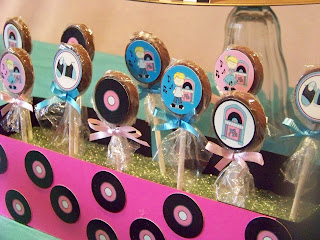 Behind the chocolate is MORE chocolate.
(Can't have too much at a party if you want to keep the guests happy! *GRIN*)
I made chocolate covered cheesecake bites. 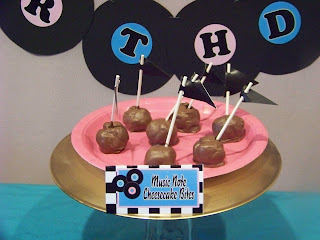 This is one of those ideas that was AWESOME in my head.  I wanted the cheesecake bites to look like music notes sitting on the record.  It was pretty cool.  Well, it didn't turn out quite right in appearance, but darn they taste good!!  (Yea, I had to try one to test it out...don't you?) 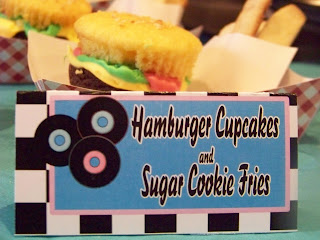 These were a project that did turn out pretty cool.  I made burger cupcakes with cookie fries. 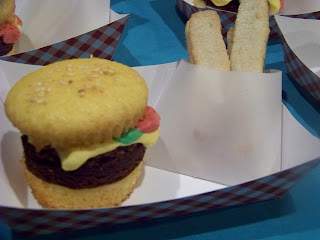 I got the instructions and these great printable containers from Bakerella. 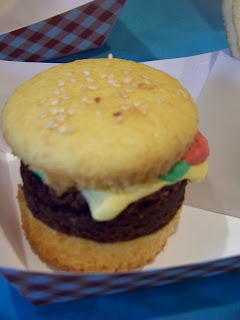 (They turned out so cute I had to share one more picture!) 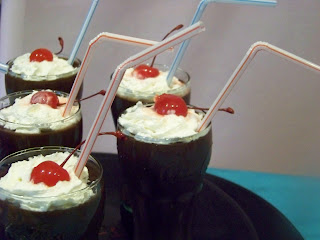 This is another project that I think turned out as fun as did in my head. 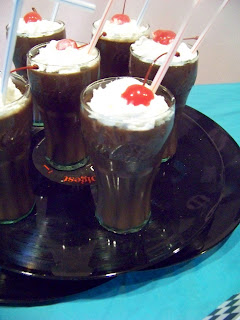 These are chocolate puddings designed to look like old fashioned Soda Shoppe milkshakes.
I bought some smaller Coke bottle glasses at Dollar Tree and filled them with chocolate pudding. Then I sprayed a bunch of cool whip on top and added a cherry (complete with stem) and a bendy straw.
(WARNING on making these:  if you use the canned whip cream for the great effect, don't put these out until right before the party...the cream deflates kinda quickly.) 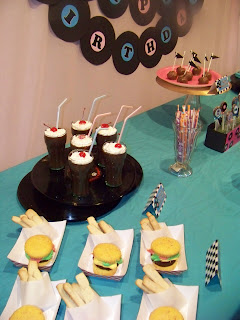 On the other side of the table, I made Chocolate Covered Oreos in the party colors.  On top of the oreos I piped chocolate music notes. 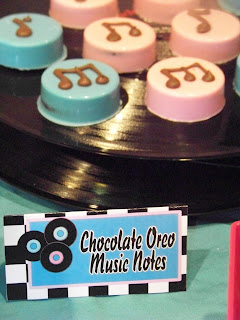 I just can't seem to have a Get-together without these being requested.  They are THAT good! 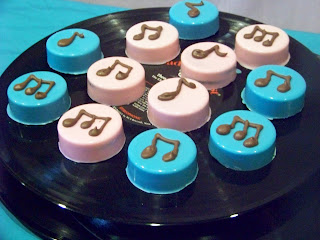 YUMMMMMMM!
Another favorite is Jello Jigglers, so I made some in the shape of records. 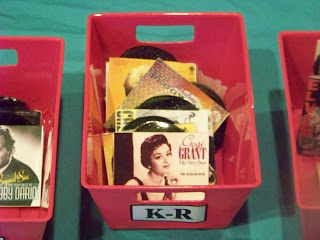 Then I made record album covers and placed the records inside little crates with "A-Z" tags to look like a record store. 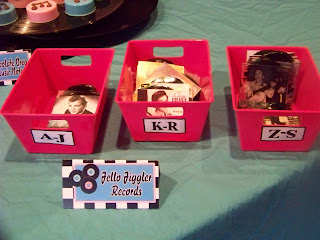 I wanted it to look like the records had been picked over, so the crates are a little larger than needed. 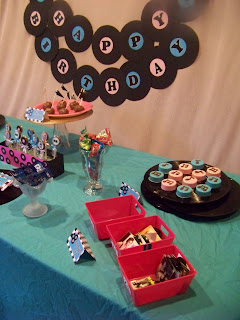 So what do you think?  Anyone hungry now?  Hope so since the party starts SOON!
We're linking up HERE
dessert table party sock hop