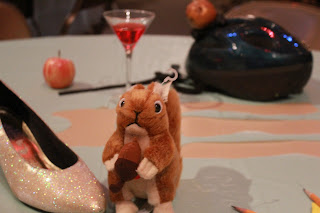 Enchanted was another movie that I had a hard time coming up with ideas on how to decorate for.  I had originally come up with a plan to make a building and wrap a dragon around it, but could never quite get it to work right.  During the last week, these decoration ideas came to me and I think they turned out pretty cute. 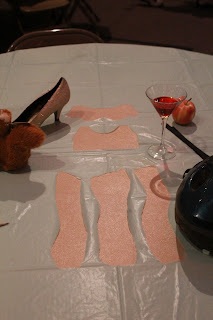 I started with a light blue table cloth from my new favorite Party supply store Factory Direct Party.
Then I cut out a dress shape from the center of the table so it looked like Giselle had cut herself a dress out of it.  I free handed it so it wasn't perfect, but I think it looked fun.
Then I made a silver version of Cinderella's shoe.  I followed the same procedure, but used a silver glitter instead of gold. 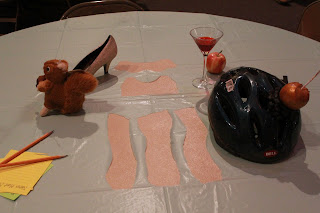 I found a chipmunk to represent Pip at Jo-Anns when I was there a few weeks ago and put him on the table.
Then I represented the 3 apples that the Evil Queen tries to give Giselle.  I had a regular apple, a apple-tini, and a poison carmel apple on a helmet.
Check out more of our Disney party ideas
disney princess table