The next Olympic Sport? 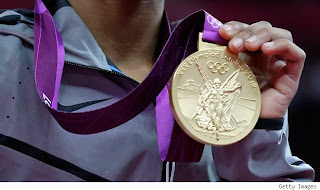 I think being a Mom should be an Olympic sport.
We could have event's like "Peanut Butter and Jelly Sandwich Making" and "Catching Throw Up" (maybe that one could even have special awards for the most original thing you've grabbed to catch your child's throw up!)  Or how about my favorite "Fastest run out of a movie theater when you get 'THAT call."
That's what happened to us this week.  Yikes, was that an adventure.

Dear Hubby and I had been trying to go see the new Batman for a while now.  We'd tried several times, but things just kept coming up or getting in the way.  We finally decided to go on Monday when they had $5.00 movie night.
About half way through the movie...for those that have seen it...they had just thrown Bruce Wayne into the pit, my daughter started calling.  I didn't have my phone on me, and being a good movie patron, it was on silent, so I didn't know.  But hubby's phone was in his pocket, so he got the vibe.
I checked my phone and saw my daughter had called twice and texted a few times.  I figured I'd better call and see what was up.  So I grabbed my phone and snuck out.  As soon as I called home, Pandemonium broke lose.
Apparently the Daredevil had decided to try and do a "Dukes of Hazard" on the top of a friend's car.  He jumped on the hood and slid right down the licence plate.  I know...you're all cringing now.  I still am too.  I did that once too as a child...it hurts like heck!
The Daredevil sliced his leg pretty good and the kids were rushing him to the Emergency Room.  We ran out of the theater at top speed.  We even beat the kids to the ER.
Three hours and five stitches later...we drove home.  And you know what I kept thinking?  I FORGOT THE DARN POPCORN.  After paying $10.00 a bag for popcorn, it was only half empty and I'd left it there.  DANG IT!
But maybe I'll be rewarded by getting a Gold in the mothering event.  Or maybe I'll flunk out for not being home to prevent it.  Or for two trips to the ER for the same child in less than six months.  That should be some type of record.  (SIGH.)