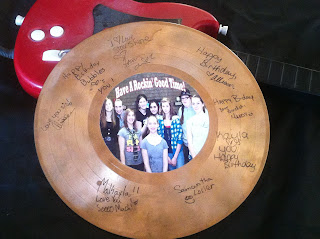 For Drama Queens 16th Birthday, we had a rocking party where the girls came and played Dance Party all night.  We had all sorts of rock and roll themed desserts and treats (which I didn't have time to take pictures of before or during the party, so it will remain mostly undocumented.  SIGH.)
But we also made these Gold Records for each of the girls as party favors. They were such a big hit that I thought we could do them again for our next Rock Party. 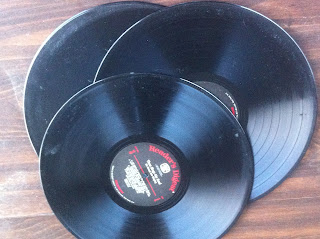 We started by going to Goodwill and purchasing a bunch of old vinyl records.  I looked for the compilation record sets since they seemed to be the cheapest way to get a bunch.  Then I looked for records that I couldn't imagine anyone ever wanting to listen again.  (I didn't want to ruin a record that someone may actually want.) 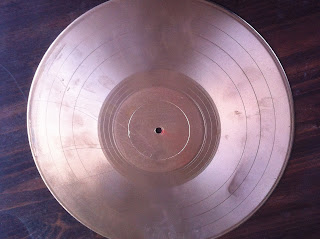 Once I had a bunch, I spray painted the records gold.  Make sure you do this ahead of time to give the records plenty of time to dry on both front and back.
Once the girls all got to the party, I took a picture of them all together.  While they were dancing, eating, and gossiping as young teen girls do, I went to work.
I downloaded the picture from my digital camera into my computer and dragged it into my favorite graphics program.  I like PrintMaster, but you can use Photoshop or anything else that crops pictures.
I cropped the picture into a circle and made it to fit over the record label area.  Then I printed one picture out for each girl.
I ran the pictures through my Xyron

with the Adhesive Refill Cartridge

to make them stickers on the back side. Then, I stuck them in the center of the record over the label. 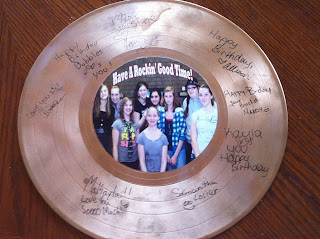 Finally, all the girls took a break before they went home and signed all the records with Sharpie markers.
These ended up being a cheap and fun party favor idea that was perfect as a keepsake for all the girls.  Now that we've moved, Drama Queen has her's hanging on her wall with her other pictures and reminisces often about her missed friends.
favors rock star