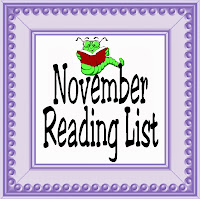 I love to read.  To escape into a book and enjoy the trials and ultimate success of the characters is my favorite way to spend an afternoon.  I read so many books each month that it's hard to keep them all straight in my memory when I want to go back and revisit some of my favorite characters.  So I've decided to start a list of each of the books I read each month and share them with you.  Maybe you will want to visit my new friends too.

by Elizabeth Norris
I enjoyed the sequel to Unraveling so much that I had to pick it up mere days after finishing the first book.  It was a little slow getting started but I guess we has to see the consequences in full force of societies melt down after the end of the first book.  I admit I spent much of the book thinking there would be a way to fix the deaths and results of the first book and was a little sad when that didn't happen.  So I guess I shouldn't have been too suprizes to see it happen at the end of this book too.  But work a happy ending coming a little like an ads on, I'm okay with it and glad I read it.

by Lisa magnum
This was the final book to the Hourglass door series.  I struggled in the beginning to get into it after reading so many other books between the series.  Once I did, I read almost straight through trying to discover the happy ending when there was so much chaos in the timeline.  I didn't see the end fight coming, although really I should have if you think about it.  I guess that was a sign that I wnjoyed the book too much to worry about trying to figure it out.  The was that Abby and Dante fixed the time line was a little strange bit if you're willing to just go with it, it was a sweet ending.  I will miss the characters in this series and hope that someday Leo will get his happy ending and we can meet up with the characters again.

I spent the first half of this book trying to decide if I liked it or not.  It was such a different form of romance than what I'm used to reading that it took me a while to get into it.  But once I decided it was good and the plot started to reveal itself, I enjoyed it.  The "romance" scenes were totally skipped over so much that if you weren't catching it clearing, you would probably not have guessed what had happend.  I am a fan of historical fiction and so enjoyed that aspect of the story.  It wasn't my favorite of all the books so far this month, but I'll probably pick up the second "Dark Triumph" and third book before long.

This book is the story of 3 orphans chosen to impersonate the lost prince.  Or at least I assume so.  I got about 10 chapters in and just didn't enjoy the story.  I'm not sure if it was the slow pace of the book or just that I didn't really enjoy the story at all.  I finally put myself out of my misery and returned the book.  Then I moved on.

This book really caught me by suprise.  I had put it last to read because I just didn't think I'd like it.  But I really, really enjoyed it.  In the beginning of this book, Mia and her family are in a car accident.  Everyone dies but her.  While she decides whether she's going to fight to live or give up, the story tells about her past and her family.  It was very well written and despite the fact that it all happens in a hospital room with flashbacks, I loved it.

I enjoyed "If I Stay" so much that I ran out and got the sequel right away.  This book happens 4 years later and is from Adam's (Mia's boyfriend in the first book) point of view.  It tells of the results of Mia's choice and Adam's struggle to let go.  I'm not going to tell you too much since I don't want to ruin the first book, but I will tell you that there is a happy ending and a very good story to be told.

This is the third book in the Divergent series.  I was super excited to read it when it first came out since I absolutetly loved Divergent and like Insurgent.  But after seeing all the one star reviews on Amazon about it, I got nervous so did a little searching and read some spoilers.  Knowing what happend in the end of the book, made me very leary to read it, but knew I had to finish the series.  I enjoyed it for the most part and am sad about the way it ended, but it's good to remember that one life can make a big difference if we just keep moving on despite the hard sacrifices and troubles of life.

I think the book was worth reading just for one quote that stood out to me above all the others.  "I fell in love with him.  But I don't just stay with him by default as if there's no one else available to me. I stay with him because I choose to, every day that I wake up, every day that we fight or lie to each other or dissapoint each other. I choose him over and over again, and he chooses me."  (Allegiant, p. 372)

From Amazon review: "Azalea is trapped. Just when she should feel that everything is before her . . . beautiful gowns, dashing suitors, balls filled with dancing . . . it's taken away. All of it.  The Keeper understands. He's trapped, too, held for centuries within the walls of the palace. And so he extends an invitation.
Every night, Azalea and her eleven sisters may step through the enchanted passage in their room to dance in his silver forest.
But there is a cost.
The Keeper likes to keep things.
Azalea may not realize how tangled she is in his web until it is too late."
This was a simple yet sweet book about healing and the power of love.  I was unsure at first and almost put it down a few times.  Yet something kept me coming back until the end when the story picked up, then I couldn't put it down.

The Girl of Fire and Thorns

From Amazon review: "Once a century, one person is chosen for greatness.

Elisa is the chosen one. But she is also the younger of two princesses. The one who has never done anything remarkable, and can't see how she ever will. Now, on her sixteenth birthday, she has become the secret wife of a handsome and worldly king--a king whose country is in turmoil. A king who needs her to be the chosen one, not a failure of a princess.

And he's not the only one who seeks her. Savage enemies, seething with dark magic, are hunting her. A daring, determined revolutionary thinks she could be his people's savior, and he looks at her in a way that no man has ever looked at her before. Soon it is not just her life, but her very heart that is at stake.

Elisa could be everything to those who need her most. If the prophecy is fulfilled. If she finds the power deep within herself. If she doesn't die young. Most of the chosen do."
What I loved most about this book what that Elisa wasn't the perfect heroine at the beginning of the book.  She's not considered beautiful. She's not strong.  She's not sure of herself.  But through the trials of the book, she learns to become an amazing heroine and we can see the changes as they happen. I enjoyed this book and am glad to see there are a few sequels to add to my reading list.

The Future of Us

by Jay Asher and Carolyn Mackler

From Amazon review: "What if you could see how your life would unfold--just by clicking a button?

It's 1996, and less than half of all American high school students have ever used the Internet. Emma just got her first computer and an America Online CD-ROM. Josh is her best friend. They power up and log on--and discover themselves on Facebook, fifteen years in the future. Everybody wonders what their destiny will be. Josh and Emma are about to find out."
I read this book in about 5 hours and must say I enjoyed every one of them.  I found it pretty funny to see these two kids try to understand and figure out Facebook from the past.  It really makes you realize how much our way of life has changed with the interenet, facebook, and blogs being such a prominet part.  But it was also interesting to see how these two kids tried to change their futures based on small snipets of our internet posts.

From Amazon review:  "Sybella's duty as Death's assassin in 15th-century France forces her return home to the personal hell that she had finally escaped. Love and romance, history and magic, vengeance and salvation converge in this thrilling sequel to Grave Mercy."

While the first book in His Fair Assassins trilogy had a good deal of focus on the problems facing the realm, Sybella's book is a more personal story withtthe problems being on the edges of the book. I did like that as you got to see the trials that went into making her the hand of justice that she is.  It wasn't an amazing book, but as part of the trilogy, I enjoyed the read.
books divergent off topic tuesday