October 06, 2015
Are you looking for a good book to read with your kids or to have some "Mom Time"?  Here are the books that we read during the month of September.  There were some great ones and some so-so books to enjoy. 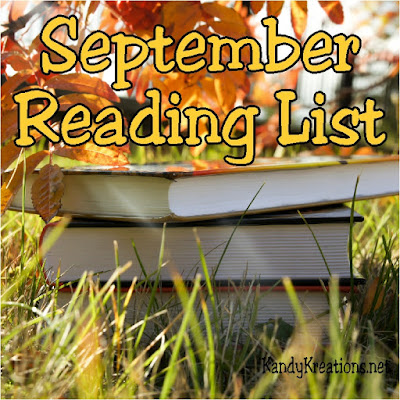 One of my greatest loves is reading.  I think if I didn't have any responsibilities I would read all day, every day.  And I admit, there are days that I have.  I think that's how I rate a book.  If I can stop and feed the kids during the book, then I know it's not my favorite, but if the kids end up fending for themselves for a day or two, I know I've found a real winner.

I've tried to instill that love of books into my kids.  Some I've succeeded with.  Other's I haven't.

Mini Me and I love to read together at bed time.  It's our alone time. We tuck him into bed, say his prayers, and then I sit and read to him for a half hour or so.  I love it because there are times we talk about things that are happening in the book.  It's a wonderful gateway into his thoughts and imagination.

And I admit, some of his books are WAY better than the ones that I read.

If you are looking for some fun reads with your kids (Mini Me just turned 11), here is what we read together during the month of September:

We both fell in love with Whit and Wisty that we went through the three books that our library had in about 2 weeks.  It was a constant read for us.  Mini Me kept asking to go to bed early, for us to read longer, and to sit and read during the day.  It was wonderful to have him so enthralled in a book and we were able to talk a little about government and our responsibilities.  (I didn't go too crazy in to it, but made a comment every now and then.)

Witch and Wizard by James Patterson

"The world is changing: the government has seized control of every aspect of society, and now, kids are disappearing. For 15-year-old Wisty and her older brother Whit, life turns upside down when they are torn from their parents one night and slammed into a secret prison for no reason they can comprehend. The New Order, as it is known, is clearly trying to suppress Life, Liberty, and the Pursuit of Being a Normal Teenager. But while trapped in this totalitarian nightmare, Wisty and Whit discover they have incredible powers they'd never dreamed of. Can this newly minted witch and wizard master their skills in time to save themselves, their parents--and maybe the world?"  (Amazon Snippet)

The Gift (Witch and Wizard #2) by James Patterson

"When they were imprisoned by the new, brutal government, Whit and Whisty were barely able to escape with their lives. Discovering a hidden community of children like themselves--hunted by the state and with varying degrees of special talents--they have taken refuge underground. But the New Order is rapidly pushing in on them from all sides, and the pressure to stop the regime is mounting.

One day, as they rush to save another group of kids who are about to be captured by police, Whit and Whisty discover not only their own faces plastered to buildings on wanted posters, but also their parents'. When the hunting party sent out after the siblings always seems to be one step ahead of them, they begin to fear that it is controlled by a very, very powerful force. They are in much more danger than they feared..."  (Amazon Snippet)

The Fire (Witch and Wizard) by James Patterson

"Whit and Wisty Allgood have sacrificed everything to lead the resistance against the merciless totalitarian regime that governs their world. Its supreme leader, The One Who Is The One, has banned everything they hold dear: books, music, art, and imagination. But the growing strength of the siblings' magic hasn't been enough to stop The One's evil rampage, and now he's executed the only family they had left.

Wisty knows that the time has finally come for her to face The One. But her fight and her fire only channel more power to this already invincible being. How can she and Whit possibly prepare for a showdown with the ruthless villain that devastated their world--before he can truly become all-powerful?" (Amazon Snippet)

A Greater Tomorrow: My Journey Beyond the Veil by Julie Rowe

"In 2004, Julie Rowe was a happy wife and mother. Then her health took a turn for the worse. While in a weakened state, her spirit left her body and entered the Spirit World. An ancestor named John greeted her and showed her many wonderful places there. He also allowed her to read from the Book of Life, which showed her a panorama of the earth's past, present, and future.
Julie saw the lives of many historical figures, such as Adam and Eve, Enoch, Noah, and Moses. She witnessed the Savior's mortal life, including his crucifixion and resurrection. She also saw the restoration of the Church of Jesus Christ through the prophet Joseph Smith, and the key events that have led to the Church's growth.

Then Julie was shown upcoming world events that will be both tragic and glorious. She saw earthquakes, tsunamis, famines, plagues, and wars, but she also witnessed how the Lord is watching over His people and is preparing places of refuge to protect them from the coming calamities. Julie was filled with joy as she saw the Saints establish the New Jerusalem and other Cities of Light in preparation for the Savior's Second Coming.

Prior to her return, she was told that at a future time she would be expected to tell others about her experience. That time has come."  (Amazon Snippet)

A friend of mine lent me this book after a talk about our Emergency Preparedness preparations.  I am not really sure how I feel about the things that she said.  I know that if "we are prepared, we shall not fear" and that the time is coming short for the Savior's second coming, but I'm not sure how much stock I put into the way she says things are going to happen.  Especially after reading another "account" of the things to come.

Visions of Glory: One Man's Astonishing Account of the Last Days by John Pontius

"In this true account of near-death experiences, we learn about the miracles of the millennium, the return of the Ten Tribes, the building of the New Jerusalem and temple, and many other astonishing events long prophesied in scripture but never before described in such vivid detail. Visions of Glory is a mesmerizing and fascinating read that you will not be able to put down."  (Amazon Snippet)

Here is the other book I read about how things are going to go down in the "last days" of the Earth.  I loved the first part where he talked so much about his relationship with the Savior and those around him.

But I couldn't help comparing the two books (this and A Greater Tomorrow). In some ways they were the same and in others, completely different.  I have a hard time reconciling that in my head, so I have a tendency to discount both.  They were both still interesting reads and I'm glad I read them.  It was a kick in the pants to get myself physically prepared for the trials in life (especially since I've already been through a flood and a fire.  You'd think I'd be more prepared!)

"Sixteen years ago the Kingdom of Winter was conquered and its citizens enslaved, leaving them without magic or a monarch. Now the Winterians' only hope for freedom is the eight survivors who managed to escape, and who have been waiting for the opportunity to steal back Winter's magic and rebuild the kingdom ever since.

Orphaned as an infant during Winter's defeat, Meira has lived her whole life as a refugee. Training to be a warrior—and desperately in love with her best friend, Winter's future king—she would do anything to help Winter rise to power again.

So when scouts discover the location of the ancient locket that can restore Winter's magic, Meira decides to go after it herself—only to find herself thrust into a world of evil magic and dangerous politics—and ultimately comes to realize that her destiny is not, never has been, her own."  (Amazon Snippet)

I admit, this was a book that I was able to put down and come back to often.  It wasn't gripping, but I did enjoy the story.  It was nice to have a book that I enjoyed but wasn't "stressing" me to finish to find out what happens.  I haven't rushed out to get the second book in this series, but I'm pretty sure I'll read it.   This was a good book, and fun to read.

"Offering advice on how to succeed, this guide teaches how to build a solid attitude foundation, promoting the value of a healthy self-image and showing how to build such an image. It clarifies why goals are important, and advises how to set them and how to reach them."  (Amazon Snippet)

I started reading this book after finding it at a Garage Sale this summer.  I admit, I haven't finished it yet, since I've been going slow reading it and underlining the good points.  There are a lot of them there, and I think this is going to be a book i may read more than once.  I don't know if it will help or not, but I suppose that's if I get out of my comfort zone and actually apply all that advice I'm underlining.