My Boys of Fall

September 14, 2011
Although I was born and spent my early years in Texas, my father was in the Air Force and we moved around during my life.  During my senior year of high school, my father retired and we moved from Northern Maine to home.
Let me tell you about northern Maine...it was cold.  There aren't a whole lot of people up there. Potatoes are grown in farm fields around the school and the kids' get off for 3 weeks in the fall to help the farmers harvest potatoes.  I'm not sure which of these factors contributed to it, but Northern Maine had no high school football.
Yes, my high school education and experience was severely lacking.
Fortunately, we moved just in time.  (I say that now, but at the time, it was a really traumatic experience.)
My first day of high school in Texas was a strange, eye opening experience.  I didn't understand any of it.  You see, my very first day of high school, was Homecoming Day.  If you haven't lived in Texas and don't know about Texas Football, you probably don't understand what I'm saying.
All 2000 kids (or so it seemed to me) in the high school were walking around wearing HUGE black and gold flowers, ribbons, streamers, bells, and football decorations on their chests.  And when I say HUGE, that's a bit of an understatement.  I think there was probably some contest to see who's Mum could be the biggest and the most gaudy.
You see, I didn't understand.  I didn't know about West Texas Football.  I didn't understand the celebration and hoopla surrounding it.
After I was married, I raised my own kids in the small West Texas town for many years, so I was able to see and learn.  My brothers all played high school football.  And now, many years later, my son's play football.  I now understand.
I now understand the excitement, the fun, and the hoopla surrounding high school football.  And I'm so thrilled that I get to cheer my own "Boys of Fall" on!  So to celebrate, I made this Boys of Fall picture frame. 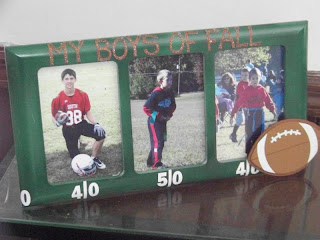 I started with a simple 3 picture frame from Dollar Tree. 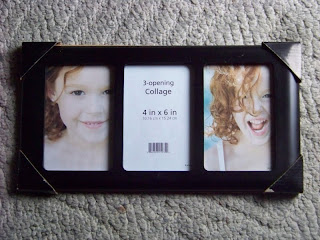 Since it's a cheap plastic, I primed it and then spray painted it Green. 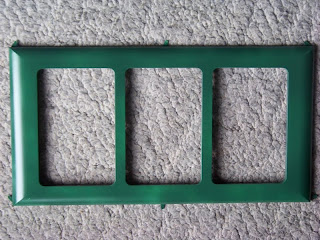 Then I ran to Walmart, Joanns, and Hobby Lobby before I found the stickers that I wanted in the color and font that I wanted.  These are a brown sparkle to look like a football.  (I also purchased white numbers.) 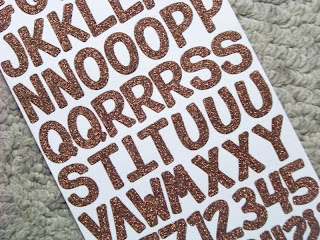 I started in the middle with "Of Fall" and placed the stickers to the right and then worked backwards to the left so I got the letters semi in the middle.  I did find that the stickers didn't work real great on the curve and painted plastic, so I did end up placing a little glue on the backs to help them stay down. 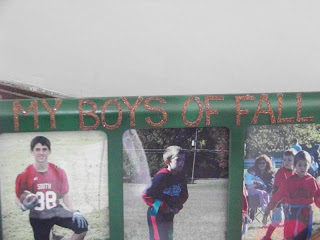 On the bottom of the frame, I placed numbers like on a football field. 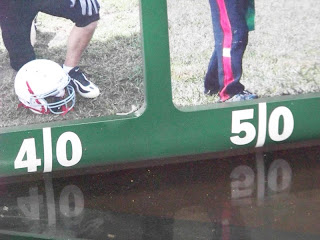 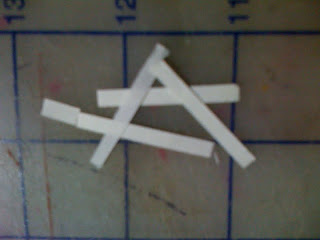 To finish it off, I glued a football I purchased at Walmart in the wood craft section onto the right side.

I'm so excited and thrilled with how it turned out.  And I LOVE how easy and quick it was to make.  I'm so proud of my Boys and am ready now for some Football!  It's homecoming week, so bring on those Mums!
decorations football