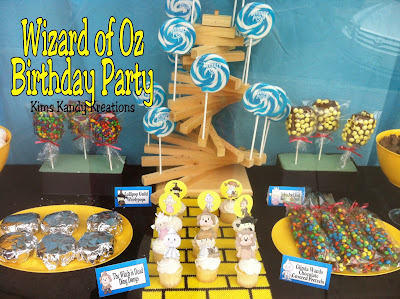 This Wizard of Oz Birthday party has been a long time coming.  I started with it being a graduation party, but we missed that due to the Colorado Wild Fires and ended up just using it to celebrate the graduates birthday since we had already started all the preparations.

It ended up being a simple but fun affair and I wanted to show you the sweet treats and ideas that we came up with. 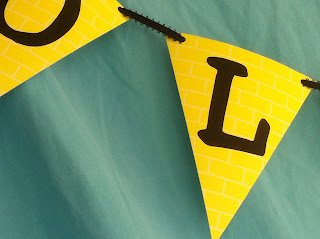 I started by using the Photo Booth Backdrop that I showed you how to make a while ago.  I use it as the  basis for all my backgrounds.  It's so quick and easy to assemble and take with me wherever I need to go to throw a party.  I put a blue tablecloth on the back and used my Yellow Brick Road pennant banner to welcome the guests to the Emerald City dessert table. 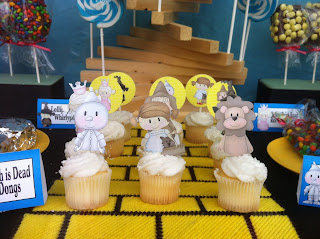 In the center of the table, I placed my Yellow Brick Road plastic canvas table runner.  On the table runner, Dorothy and her friends are on our cupcake toppers and are walking the yellow brick road to get to the Emerald city sucker stand in the back.  The sucker stand has 3 inch whirly pops on it for each guest. 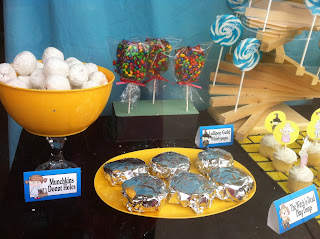 To the left of the Yellow Brick Road, we had "Ding Dong the Witch is Dead" Ding Dongs.  Since you can't find ding dongs anymore (although I'm hoping the new Hostess will have them out soon...YUM!) I found a Homemade Ding Dong recipe by Bean Town Baker.  I wrapped them up in silver foil to give them the original Ding Dong look and placed them on a yellow plate that I found in the summer section at Walmart.
Next to the Ding Dongs, we had "Munchkin" Donut Holes and Rice Krispie Treat Chocolate sunflower treats. 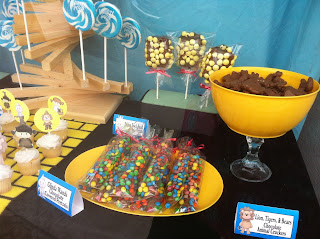 On the other side of the table, we had "Glinda the Good Witch" Chocolate covered Pretzel wands.  I covered the pretzels with chocolate and then with mini M&Ms.  These were a definite hit.  Then we had "Lions, Tigers, & Bears" chocolate animal crackers.  In the back we covered rice krispie treats with our yellow milkies to make Yellow Brick Road Bricks. 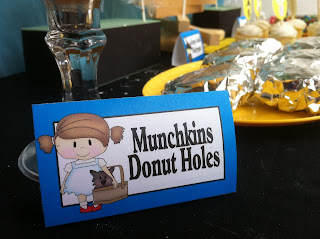 One of my pet peeves is to go to a party or potluck and not have any idea what you are eating.  So we continued our table card tradition and labeled each of the foods with fun and informative treats.  Each of the Wizard of Oz Character tables cards have a blue background and a different character on it.  You can use these as food cards or name cards or game labels...just about anything. 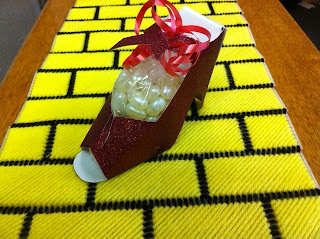 We ended up playing Pin the Heart on the Tin Man, but I was so busy that I forgot to take pictures of us doing it.  We also played a Wizard of Oz bingo game and a few others.  We ended up giving out the Ruby Red Slipper Jelly Belly treats as prizes for each of the games we played.  That was a big hit with all the girls who won. 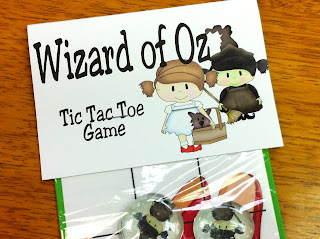 As a party favor to all our guests, we gave out the Wizard of Oz Tic Tac Toe games that we made and the Yellow Brick Road candy toppers as parting gifts.  I think the kids all had a good time and I am so excited to have been a part of this special day!
birthday dessert table party wizard of oz