Mermaid Stories to Swim Away With

January 16, 2021
One of my favorite things to do is to curl up on the couch with a good book and a cup of hot chocolate.  When it starts getting too cold, it's fun to dream of summer and swimming in the sea.  So tonight, check out these 9 mermaid stories for your Kindle. 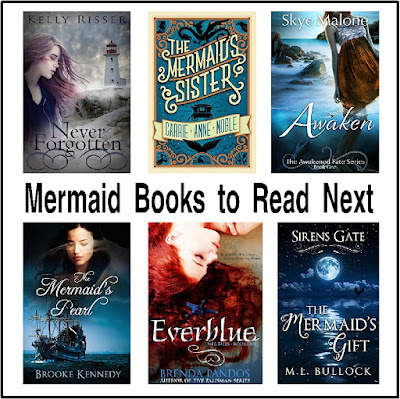 There is no cure for being who you really are...

In a cottage high atop Llanfair Mountain, sixteen-year-old Clara lives with her sister, Maren, and guardian Auntie. By day, they gather herbs for Auntie’s healing potions; by night, Auntie spins tales of faraway lands and wicked fairies. Clara’s favorite story tells of three orphaned infants—Clara, who was brought to Auntie by a stork; Maren, who arrived in a seashell; and their best friend, O’Neill, who was found beneath an apple tree.

One day, Clara discovers iridescent scales just beneath her sister’s skin: Maren is becoming a mermaid and must be taken to the sea or she will die. So Clara, O’Neill, and the mermaid-girl set out for the shore. But the trio encounters trouble around every bend. Ensnared by an evil troupe of traveling performers, Clara and O’Neill must find a way to save themselves and the ever-weakening Maren.

And always in the back of her mind, Clara wonders, if my sister is a mermaid, then what am I?

Princess Margrethe has been hidden away while her kingdom is at war. One gloomy, windswept morning as she stands in a convent garden overlooking the icy sea, she witnesses a miracle: a glittering mermaid emerging from the waves, a nearly drowned man in her arms. By the time Margrethe reaches the shore, the mermaid has disappeared into the sea. As Margrethe nurses the handsome stranger back to health, she learns that not only is he a prince, he is also the son of her father's greatest rival. Sure that the mermaid brought this man to her for a reason, Margrethe devises a plan to bring peace to her kingdom.

Meanwhile, the mermaid princess Lenia longs to return to the human man she carried to safety. She is willing to trade her home, her voice, and even her health for legs and the chance to win his heart….

A surprising take on the classic tale, Mermaid is the story of two women with everything to lose. Beautifully written and compulsively readable, it will make you think twice about the fairytale you heard as a child, keeping you in suspense until the very last page.

Never Forgotten
by Kelly Risser
Meara Quinn is about to find out there are worse things than moving to a tiny oceanside town before her senior year. Like discovering there's a secret being kept from her and knowing it's a life-changer.

After experiencing vivid visions of her absentee father, Meara decides she deserves answers. With the help of her new friend Evan, a guy she happens to be falling for, she embarks on a journey in the hopes of unlocking family history and finding her true self. But when she meets a handsome stranger at a local club who knows far more about her than he should, her world is again shaken. In him, Meara may have uncovered the key to the very secret that will reveal not only who she is... but what she is.

The Siren
by Kiera Cass
Kahlen is a Siren, bound to serve the Ocean by luring humans to watery graves with her voice, which is deadly to any human who hears it. Akinli is human—a kind, handsome boy who's everything Kahlen ever dreamed of. Falling in love puts them both in danger . . . but Kahlen can't bear to stay away. Will she risk everything to follow her heart?

Running away from home was never Chloe Kowalski’s plan. Neither was ending up the target of killers, or having her body change in unusual ways. She only wanted a vacation, someplace far from her crazy parents and their irrational fear of water. She only wanted to do something normal for once, and maybe get to know her best friend’s hot stepbrother a bit better at the same time.

But the first day she goes out on the ocean, strange things start to happen. Dangerous things that should be impossible. Things to which ‘normal’ doesn't even begin to apply.

Now madmen are hunting her. A mysterious guy with glowing blue eyes is following her. And her best friend’s stepbrother seems to be hiding secrets all his own.

It was supposed to be a vacation. It's turning out to be a whole lot more.

She wanted her life to change ... he wanted his to stay the same.
Seventeen-year-old Ashlyn Lanski is tired of her boring, single life. Swimming and spending time with Tatiana, her best friend, are her only sanctuary. The girls plan to leave their drab lakeside town far behind for college, and Ash hopes to finally ditch her longtime crush for Finley, Tatiana's twin brother. But when Tatiana and her family fail to return home after a family emergency, Ashlyn makes an irrational decision to deal with her loss of them.

Finley Helton and his family are good at blending in with humans as they run their sailing charter business in Lake Tahoe. The truth is they guard an ancient secret. When a not so routine meeting forces Finley, Tatiana and their mother to return to their underwater home of Natatoria, they learn Fin's father will lead a dangerous mission. They must stay in Natatoria and wait for his return, but Fin can't stay caged up for long.

Secrets lurk beneath the deep blue waters of Lake Tahoe, and a simple lifesaving kiss will change their lives forever.

Nike Augustine isn’t your average girl next door. She’s a spunky siren but, thanks to a memory loss, doesn’t know it—yet. By day, she runs a souvenir shop on Dauphin Island off the coast of Alabama, but a chance encounter opens her eyes to the supernatural creatures that call the island home, including a mermaid, a fallen goddess and a host of other beings. When an old enemy appears and attempts to breach the Sirens Gate, Nike and her friends must take to the water to prevent the resurrection of a long-dead relative…but the cost might be too high.

To make matters worse, Nike has to choose between longtime crush, Officer Cruise Castille and Ramara, a handsome supe who has proven he’s willing to lose everything—including his powers—for the woman he loves.

Tears of the Sea
by Mary Lu Tyndall

Doomed by the evil warlock Forwin to wander the ancient seas as a mermaid for all eternity, Perdita longs for the release death would bring. Every ten years she has a chance to break the curse when she emerges from the sea fully human for one month. The catch? She must find a man willing to die for her. Yet, after three hundred years, her failures have left her heartbroken and alone.

Savion Ryne wants nothing to do with beautiful women. It was one such woman whose betrayal sent him far away to battle Natas’s rebellion. He longs to return to his father’s kingdom in Nevaeh, but he is destined for a mission, but where and to help whom? He doesn't know. After Savion falls off his ship during a storm, he wakes on the shores of an island with visions of a dark-haired mermaid tending his wounds. Later, when a woman similar in appearance begs for his protection, he is suspicious.

Perdita has never met anyone as honorable as Savion. Even though he shuns her every advance, she falls for him. But as the end of her time on land approaches, she faces the hardest decision of all: save Savion and remain cursed for all eternity or break the curse and watch the man she loves die.

Raewyn is tougher than your average mermaid princess. She lives in a fortress far beneath the surface of the ocean, where she constantly breaks the rules. Fear of extinction has caused the merfolk to arrange marriages and take away romantic freedoms, causing Raewyn’s hopes and dreams of true love to crumple. After a quest gone wrong, she finds herself held captive aboard the Devil’s Pearl, among the worst humans of all—pirates.

Captain Aiden Flynn is handsome and charming, spending his time sailing the seas and hording treasure. His villainous reputation has even reached the depths of the ocean. When he finds a dark-haired beauty ensnared in his net, he puts on his best charms in hopes of finding out just who she is.

Will his dangerous, yet charming, demeanor win her over? Or will he fall, as many other men have, to the wiles of a mermaid princess?
books little mermaid